In the fourth and final match of the preliminary round, The North Carolina Courage wrapped up with a perfect record. In that final preliminary match, they also used all five allowed substitutions. That last sub brought Lindsay Agnew into the match for her first on-field action with the Courage. 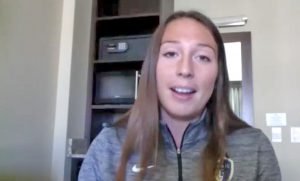 Good question Well, I’ll give you two answers. One answer is, I’ve always loved sports. So if I wasn’t playing soccer, for example, I feel like there would be another sport that I would be playing because I’ve just always loved them, and I come from a big sports family. I see your Canes thing in the background. I come from a hockey family. I love all sports.

These are kind of hard questions. I didn’t know maybe I’d get extra training, get a little better at soccer, or maybe you know hanging out with friends and family, those are my three favorite activities. 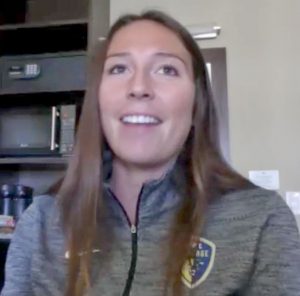 Definitely approach me. I don’t think I’ve ever been told I’m intimidating, so anyone feel free to come up. Maybe COVID — that’s kind of frowned upon to take a selfie or something but hopefully this whole thing’s over soon and I’ll be taking selfies, and having a nice talk. So I love all the fans. Definitely come up and talk to me.

Yeah, maybe this selfie stick is going to make a comeback. 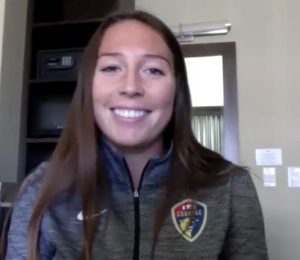 I think for me, I think just being able to play against these like these girls all this time. I think I can really learn a lot from them and just attacking like I said, you know, 1v1 beating some of these girls — if you can beat some of these girls to the ball, then you’re probably in good shape for the other players. There are so many talented players with so many unique skill sets and I think if I could just even take little skills from each player and bring them into my game, I think I’d be a happy camper after this year.

What do players talk about before the game? 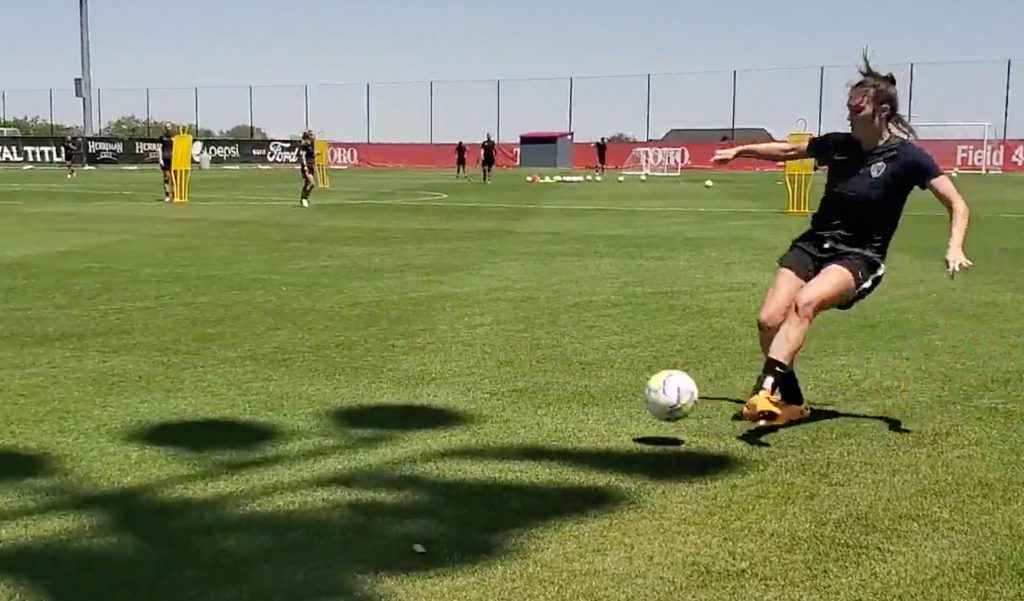 It’s been pretty awesome actually. Usually what happens is Abby Erceg or Kiwi we call her — she’s been giving some pretty phenomenal speeches in the locker room. It’s kind of funny sometimes you know Sam Mewis’ face during the speeches is like, “where does she come up with this stuff?” They’ve been pretty good — pretty fired up getting some goosebumps and stuff. Then we usually put on this one song and Cari Roccaro is yelling and then we all yell back at her. So it’s pretty hype before the game.

What’s an example of one of those goosebump things that Erceg has said, if you can share?

Just like in terms of specific teams, we were talking about, just like the stars on our jersey and what that means to the club and even just hearing about the beginning of the club — how it started in Western New York and started with this underdog mentality and brought it forward into this and I think from an outsider, sometimes I’m like, “oh, The Courage has always been this team,” but then to just hear that they play every game with that chip on their shoulder and they’ve got something to prove. I think that’s just very inspiring for any player. 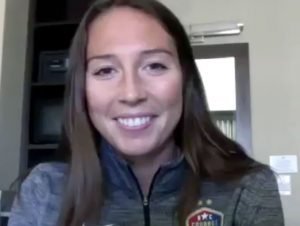 Wow, that’s a tough question. I’m pretty happy a lot of these players are on my team. Debinha. She is so tricky. She can make you look so dumb if you’re not on her team and she just pulls out crazy cool skills. The other game, she almost pulled off a  full volley in the air. So I think I’m pretty happy she’s on my team.

There are a million players you could pick. I’m not trying to get in a race with Lynn Williams either, you know? 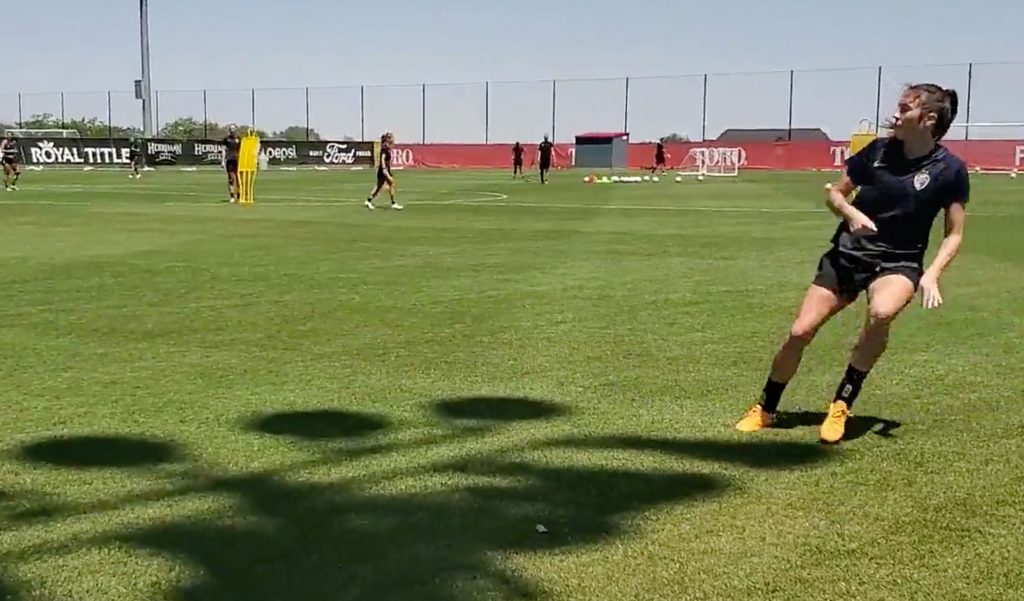 The best part of competing for me is just always wanting to be the best. I’ve just always been driven by that since I was a little kid. It’s just such a unique way to be able to prove yourself and put everything you work into it and just be so inspired to just win in any given moment. I think that’s why I love competing. There’s always room to get better, and there’s always something to prove.

I don’t know if you watched the Michael Jordan documentary about just like always having that, “I want to make sure if someone’s watching me then, this is the best player that they see. And I felt like I could really relate to that feeling — always wanting and knowing whoever shows up or whoever I’m playing, even if I’m playing pickup back wherever, I just want them to walk away and be like, “Oh, I see why Lindsay Agnew is playing pro.”

Oh, my family. I mean, I think they always watch them home, but it’s just an awesome experience when I get to see them in the stands. I was at the FIFA World Cup this past summer, and they all came. It’s just really cool to like look up and see them because obviously they’re the people that have helped me get to where I am today. 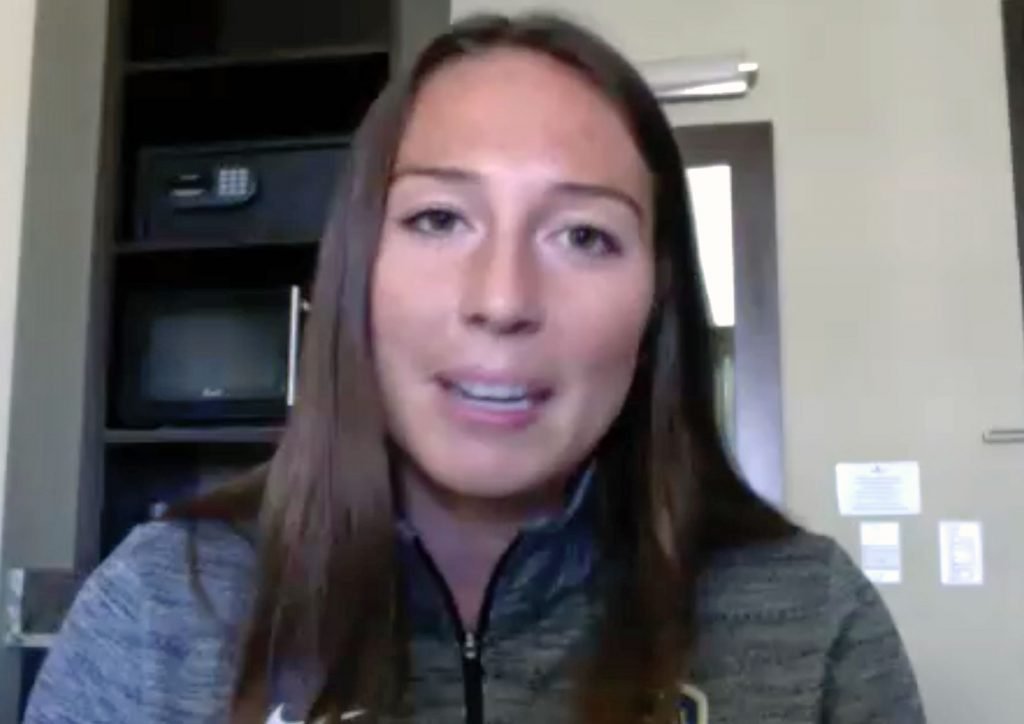 I honestly like to have a little bit of nerves going into a match. I feel like that adrenaline kind of gives me that extra little spark and that competitive edge in the game. But I love listening to music. I like dancing in the locker room with the girls and being a little bit light leading into the game.

Then post-game, I like to kind of unwind. I’m actually one of those players that loves to watch my game like right after I finished because sometimes I think about the plays too much if I don’t just watch it back, and then I can see actually what happened. In a perfect world, I like to watch my game right back, but sometimes if we get home at like midnight, it’s not going to happen because sleep’s definitely more important for recovery.

Have you ever had in watching it back, have there been those “aha” moments thought it played out one way, but seeing it back, it was different? 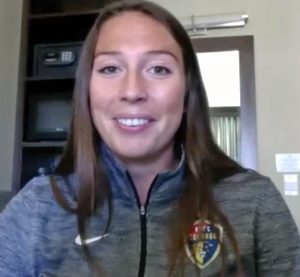 I think I probably lean on the side of being a little too hard on myself sometimes, or I’ll beat myself up so much about a play. Then I’ll watch it back and be like, “OK, I didn’t have that many options or it wasn’t that bad.”

But I think as pro players, most of us are pretty hard on ourselves and want to hold ourselves to that perfect game — every player wants to have that perfect game, but I don’t think it’s honestly, maybe even possible. But we can always strive for it.

I think in 10-15 years the female game will advance a lot and the skills and athleticism will continue to get better and better. I think women’s soccer will progress and become more popular in other countries and become more competitive worldwide. I also see more big businesses and clubs investing more in women’s programs and the NWSL being a common household league name among the MLS, NHL, MLB, WNBA etc. 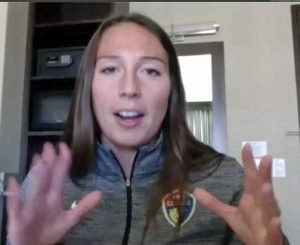 I didn’t know they would be such a hit. At the hotel, there’s not a lot going on, so we’ve been playing a lot of games, and doing a lot of different things. So one night, the card tricks came out. I have a cottage in Northern Ontario that doesn’t have electricity. So we also have a lot of card time with cards and things like that so I was doing some tricks for the girls. But there are a couple of people who have some good tricks. Hammy [Kristen Hamilton], she has a good card trick and Lynn [William] has a nice one too. So we were all kind of comparing notes.

Meredith Speck was doing one of mine to some of the girls and so it was kind of kind of cool. It was funny to see that. Then Meredith wants me to do like a segment of magic tricks and I’m like, oh yeah, give me the hat and the bunny. I’ll pull it out.

Like the Courage, were just starting our 2020 campaign midway through the year. Check out our first four 2020 Starting XI Questions: