2020 has been one for the books, and not for any of the right reasons. One positive though is the NWSL is set to return via the NWSL 2020 Challenge Cup tournament. But in the meantime let’s get to know one of the new faces to the Courage roster in 2020.

Courage Country sat down with Sinclaire Miramontez as the first player to answer our 2020 Starting XI Questions.

That’s a really good question. I think I would actually try and go practice some other sports. I really enjoy playing tennis in my free time, so I actually think I’d go play more tennis or ping pong. It’s a little bit lighter on my ACL. 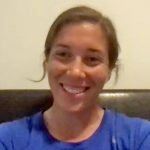 I mean honestly, just come up and say hi to me. I love to meet new people. Ask me about my time in Kansas City. Ask for my opinion on whether North Carolina or Kansas City has better barbecue, and I’ll have a debate with you about it, because honestly, Kansas City does, and I will defend that. I’m sorry. Nothing compares to Kansas City barbecue. My mind’s not going to be changed on that.

Long passing with my left foot, which is my non-dominant foot. That’s something I’ve been trying to work on for the past year. I want to keep progressing with that for long-range passing, but also just more accuracy on my long passes with my left foot. My right, since I did ACL [surgery], I spent a lot of time working on that, just trying to get that strength back up, but I also need to translate that over to my left as well.

Well, I’ve never been in the tunnel before the match, so I don’t think I can answer that question. [At Nebraska], we didn’t have a tunnel, but we would all gather before this door before we would run out and each season, it would change. We would do different things when we were walking out of our locker room. It might be group clapping, yelling, and just trying to get hyped.

Debinha — 100% Debinha. I mean she is so cheeky. She comes out of nowhere sometimes. She’s one of the hardest people to mark and defend. I’m very glad to be playing on the same team as her, instead of against her. 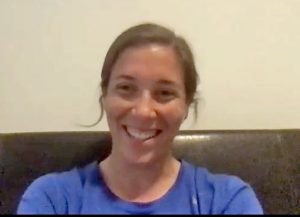 I think sometimes it just comes down to the person you are. I’m naturally just a very competitive person. I have been my entire life. But I think it’s just the thrill of being able to push yourself beyond what you ever thought was possible. In my mind, you can be competing against someone else, but at the same time, you’re also competing against yourself — to push yourself to be better than what you were the day before. I think there’s beauty in that. Your mind and your body can go so much further than you think are possible initially. I think that’s a beautiful thing. It’s incredible.

Normally, I’d say my parents, but they’re always there. Honestly, I think my older sisters. My two older sisters, I looked up to them from the get-go. They’re the reason why I even started playing soccer. I want to share this moment with them. Sydney and I were able to share that in college. Unfortunately, we didn’t get to share a year together in a league, but I think this is something still special that we will get to share. I think I wish that both of them could be watching and be at every single game that I could play in and just make them proud because they were always my role models growing up. That’s all I ever wanted to do, was make them proud. 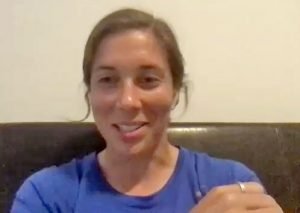 So before, it’s going to sound weird, but I have to listen to really really hype dancing music to calm my nerves. That just kind of feeds my energy, and my energy will overtake my nerves to a point where I won’t feel them anymore. During a match, it’s definitely that sometimes I try to push through the balls in my feet, to just take a second to realize where I am, gather my thoughts really quickly, and remember to breathe for a second and gather yourself, and figure out where’s the next spot you need to go to and what phase of the game are we in. It gives me a second to realize that and collect my thoughts to get back into the game. Then after the game, honestly, just talking with other people about things — not soccer. It kind of calms me down and just helps me come down from that adrenaline rush while playing. It helps me get my mind off of things, and just back into real life. 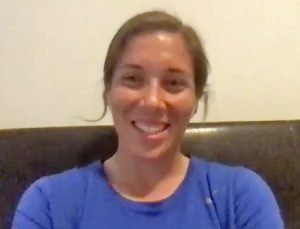 I see women’s soccer growing so much in the next 10-15. I think we look at 2019, and how a single summer was able to change the dialog about women’s soccer in the United States. We saw great progressions heading into the NWSL obviously before COVID hit. But I think with more attention, more investment, which we’ve seen to the league. We see the continued success of the national team and players taking on more than just soccer roles, with being advocates for so many different social justice issues. I think that’s huge, and in the next 10-15 years, I hope that the NWSL has the same respect as the other major league sports in the country, maybe they’re even overtaking MLS to the point more people are talking about women’s soccer leagues in the United States. But I truly think that can happen in 10-15 years. More people are realizing just what incredible athletes play in this league and that women are entertaining athletes to watch and they deserve the same respect as the men.

What’s been the biggest adjustment to life as a Courage player?

Just when you go into those practices, the practices are just at such high levels. The biggest adjustment has been the speed of play, but that goes so much further than just how quickly you’re moving the ball. It’s your decision making. It’s your recognition. That has to pick up even faster. I think that’s probably been the biggest adjustment — trying to have my thoughts and recognition go faster than what I was used to in the college game.

One of the biggest things that make this team so successful is how mentally tough they are. They play so fast. They’re able to think so quickly. They recognize so quickly. To be able to sustain that for 90+ minutes, on a regular basis is incredibly challenging to do. That has stood out — how these players are able to sustain that amount of focus and intensity for such long periods. I think for me, as a young player and still developing, that’s going to be a huge thing for my career that’s going to help out. You know, what better place to learn than the Courage? Sometimes I think the practices are going to be harder than the games. Being in that environment every single day — I think I was saying this earlier to one of the players. It’s impossible not to grow here as a player. In the long run, that’s going to be huge for me to develop that. It’s something they do better than anybody.

Like the Courage, were just starting our 2020 campaign midway through the year. Check out our first 2020 Starting XI Questions:

Look for more articles on Sinclaire Miramontez throughout the 2020 season here on Courage Country.