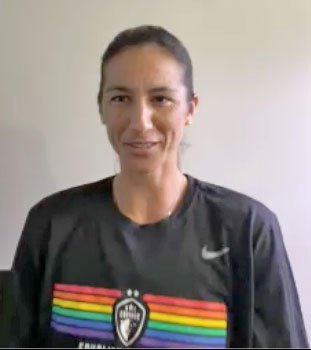 Oh, when we were quite strict, it was not having anyone to train with. Sometimes you were just training by yourself. So Paul [Riley] would send out some drills to do. There were days when I was kicking against the bench because I didn’t have anyone to train with. So that was interesting to navigate and a little annoying sometimes.

In all honesty, because I’m so introverted, probably getting the time to read and be myself. Sometimes you get dragged down. Sometimes just don’t want to be so, you know being my myself sometimes is quite nice.

Do you read mainly fiction or non-fiction, or switch back and forth?

I think it’s kind of a philosophy that I’ve always had and it’s just that hard work will always get you through. Having the right attitude will always get you through. Players like Mary Speck are probably a really good example of that. She’s worked so hard for so many years, had just the best attitude. Then finally in 2020, 2021 she’s getting a chance and she’s being rewarded for it. So I’m a full believer that with the right attitude, and a good effort good things will come your way.

It was Kristen [Hamilton], and I still do call it her to vent sometimes. It’ll be Lynn too — Lynn Williams. She has a level head on her shoulders. Sometimes she doesn’t but sometimes she does, and she can be a good place to go to for advice.

Then also Paul as well. I’ll go to him for advice, especially in and around the field, so kind of rotate between those three.

What’s been the biggest “a-ha” moment in your professional career so far?

Oh for sure it was, “Oh if I get fit this will be easier.”

So getting strong and getting fit was kind of the “a-ha” moment — fewer injuries. I can do more. I can play better. Why not do that?

Ever since I kind of decided to focus on it, I don’t really get injured a lot, especially soft tissue injuries. I’m not missing games because I’m fatigued or tired or injured, so yeah it’s been a bit of an a-ha moment for me.

I think, adapting more of a professional mindset is probably the biggest adjustment. I came from Chicago. Before that I was in Germany and just the mindset wasn’t there to win games and to win championships. It wasn’t, “I need to sacrifice a lot of things to be successful.” And by sacrificing, I mean it’s just not going out and drinking after games, or you know spending time recovering instead of being outside tanning in the sun or you know.

So I think the environment here is very much around performance. It’s very much adapt to that or you’re just going to fall by the wayside pretty quickly. I think people realize that relatively fast in this environment. We’re here to win. We’re here to get better and we need to do everything that we can because it’s so competitive here to be able to do that.

I get this question quite a lot, and this one’s a little different for me, because in New Zealand, it wasn’t soccer as the main sport that we had growing up, so I didn’t have role models. I didn’t even hear the name Mia Hamm, Abby Wambach, or Kristine Lilly until I was actually playing against them. So those role models came a little bit later for me.I remember playing in a game against Kristine Lilly I just thought, “My God. This lady is just an absolute monster.” She was an athlete. She was at her peak when I was playing her, so I was like the 16-year-old kid trying to keep up with this 300 cap player. I just was like, “Man, she is a machine,” and I wanted to be like that. I wanted to just be able to work hard and make it look easy, you know, flying by players or whatever it was. So I think, later on, it was probably Kristine Lilly.

Probably my coffee machine. Yeah, coming from New Zealand, and I’ve gotta have some good coffee, so I need to have my machine.

Very much so. If I can have a reliable source at home, I’m good.

I really like tennis. I love tennis and if I could be good at that I would love to play that I think it’s fun.

Honestly — croissants. It’s been croissants. I found this amazing place. It’s a little bit of a plug for Boulted Bread. But oh, they just do the best croissants and I love croissants. So it’s been my guilty pleasure.

Question from Denise O’Sullivan: What’s your favorite meal to eat after a game.

Honestly, I do like a good burger — burger or pizza. If it’s been a really hard game I’ll do that. But my go-to is usually sushi. It’s filling. It feels like a bit of a treat because I’m not making it but it’s not going to destroy my diet or make me feel like crap in the morning.

If it is a burger, what are your toppings?

I like chicken on my burgers, avocado, lettuce, tomato, mayo — just the kind of classic chicken burger. Back home, we put beetroot and a fried egg on our burgers, so I quite like that as well — quite difficult to find here, so just go to the plain chicken burgers.

Pizza? Same thing. I’m a pretty basic girl. I like a good cheese pizza, but I do like chicken o my pizza as well. I know this is a bit of a point of contention to some people. I like chicken and a cranberry sauce or brie on there as well.

No pineapple though? I thought that’s where you were going with that

God no. I can’t have pineapple on there. Absolutely not.

Look for more articles on Erceg and the entire North Carolina Courage squad throughout the 2021 season here on Courage Country.