Skip to content
Home Interviews 2022 Starting XI Questions: Malia Berkely
As one of the new faces to the NC Courage for the 2022 season, Berkely is already making her mark, playing in 10 matches and 828 minutes so far in 2022. She sat down with Courage Country virtually last night from Portland where the Courage are preparing for tonight’s (August 5, 2022) match against the Thorns to answer the 2022 Starting XI Questions.

I would have to say myself for one and probably all the coaches in the past that told me I couldn’t. Yeah, probably those two.

Oh, that’s tough. I’m really thinking about this now. I’m like going through everyone. I would have to say Meri Speck. She is an absolute workhorse — always upbeat and positive and is kind of the glue of the team I would say.

In the next year, I would love to make it into the national team. As hard as going to be you gotta keep going forward until I get there.

Probably being open to realizing that I’m not always right. And that I have a lot of room for growth and to kind of keep moving forward knowing that everything is going to help me get to where I want to be instead of being closed-minded.

I would probably say, just throwback music in general — maybe some Akon or Big Sean are like way throwbacks.

6. Name a time being a professional athlete opened the door to a unique or special experience.

So, in Bordeaux, since the men and women’s sides are tied together, and some NWSL teams are like that, but not all of them. But over there, they’re very tied together. Getting to go to a men’s game — just every time it’s a home game, we would get in free. We would have the VIP section where you’d have the food and your own section.

All the families or whatever would be there. Then getting to see them play PSG was probably the highlight. My dad actually got to go to that game, too. He was visiting me so I would say that was probably one of the coolest things.

8. What was your first big win of mind over matter in soccer?

I would say coming back from my ACL. I had pain trying to relearn how to run. One day, I was just like, eff it. I’m gonna run until it doesn’t hurt. And then I actually had a pop in my knee and then it loosened up and I felt fine running. I would probably say that day is when I was like, if I just go, it’ll happen.

I would have to say being the first player in the ACC, to get back-to-back ACC Defensive Player of the Year.

11. Question from the last player (Brianna Pinto): How does it feel to be engaged? Was it as euphoric as people say? 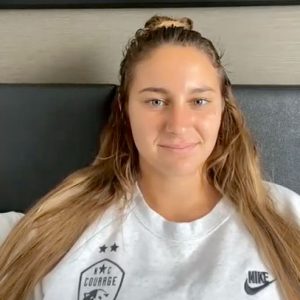 I wouldn’t say euphoric, I was very, very happy when it happened. But it kind of was a little bit of a mess how it happened. It wasn’t a mess. It just didn’t go as he planned. But I also think that that’s kind of perfect because that explains us. When we plan things, nothing ever goes as planned. So I think it makes it perfect.

So in the morning, We’re driving to the Bonnet House, which I guess is like the oldest house in South Florida. It’s preserved and has acres and acres of beautiful gardens. We’re in the car driving and I see the box in his pocket. Like it’s bulging out of his pocket. You can not say it is anything. It is clearly a box. I didn’t say anything, but I was like, “Oh, it’s coming. Okay.”

Then we get there and he asked this worker to take a picture of us. I was going to set up and then he was like, “Could you take a video of us?” I didn’t hear that part, but I heard her say you want me to take a video of you?

He was like, “Yes, can you please just take a video?”

And she was like, “Do you want it of the scenery?” 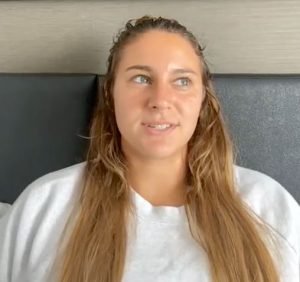 “No, can you please just focus on us and take a video?”

She was like, “Okay, I’ll let you know when I’m recording.”

He was just red faced and flustered. I think it’s hilarious. I’m dying laughing because I know it’s about to happen.

Then he gets down on one knee and proposes andI was so happy. I just thought it was the funniest thing ever. It was perfect in my eyes, not in his.

Look for more articles on Malia Berkely and the entire North Carolina Courage squad throughout the 2022 season here on Courage Country.