Skip to content
Home Interviews 2022 Starting XI Questions: Meredith Speck
As a mainstay veteran of the NC Courage, Meredith Speck has continued to grow into a leader on and off the field, increasing both her playing time and her veteran voice. She sat down with Courage Country virtually last week prior for their two-game road trip to answer the 2022 Starting XI Questions.

I think there are several factors. I mean, I think one is, that I really am very close with my family. They’ve been nothing but supportive. They also like to give me a hard time that I am away from home.

So I think for me, if I’m choosing to be here and not be back in New York with them, of course, I’m going to take advantage of every minute that I’m not there, and I’m not going to waste my time not being there. So I think for me, I’m making this sacrifice to be here. So why would I waste my time and time away from my family to not basically train as hard as I can every day.

I also think for me, I genuinely enjoy training every single day. So if I can — maybe if one of my teammates is dragging a little bit that day, I can give them a little bit of energy. Then make their day a little bit better when they’re not really feeling it. I think for me that kind of is something else that I consider motivation on a daily training day.

Oh, wow. Yeah, that’s a tough question. You know, I think she’s getting a little bit more recognition right now, but I do think that Britt Brittany Radcliffe — she is such a hard worker. She has such a good attitude. She never complains. She’s all about the team first and, obviously, the rookies are young, but you’re kind of your time will absolutely come.

For Britt, she’s a little bit older. She’s just a year younger than me, and her attitude is just so phenomenal. I’m just very grateful that she is getting the recognition now, because she kind of just sucked it up at the beginning of the season, when it would have been very easy for her to just kind of have a bad attitude — and she never would. And so I think that for me, Britt definitely is someone that I very much admire as far as how she has handled herself, as long as I’ve been on the team with her.

I mean if we’re talking like fun bucket list, I really want to go to Greece. So is that an answer that people are giving? Probably going to stick with that I think.

Oh, tough questions. I would say, learning from mistakes on and off the field — I try to do it with, again, not taking myself too seriously — so a little bit of humor, for sure. And kind of just realizing that they’re going to happen. So of course, I think accepting them and not really just brushing them off. Everybody makes mistakes. Living in them for a moment, but then definitely also letting them go because there’s no point. You can’t fix it. You can learn from it.

Then hopefully going forward, you know, if you find yourself in a similar situation, hopefully you react or have made enough of a change to see that the next time you’re in that situation and close differently. And then if it does, great, and if it doesn’t then, reflect a little bit more and be like, what about this situation have I not truly examined?

This is gonna be for sure acurveball, but really I listen to “Fix You” by Coldplay before every game. It has a really good build towards the end and there’s this video from the 2014 Men’s World Cup. And it has a little like pump up speech at the beginning. Then it’s followed by “Fix You” at the end and I watch that video before every game.

6. Name a time being a professional athlete opened the door to a unique or special experience.

I mean, well, this past year, we got to fly on a private plane twice. So that was pretty fun. We were like, “Oh, it turns out there really are no rules on an airplane.” On a commercial flight, they make you do all these things, but when you fly on a private plane, they’re like, “tray tables can be down. Seats can be reclined.” There’s no rules. So I think maybe that was definitely something I had not experienced until being a professional athlete.The first one was after we won the semi-final for the Challenge Cup. We were flying back from Kansas City. Tthey were treating us as a club because it was a quick turnaround for the finals back in North Carolina. We were very appreciative, and it was a very nice gesture from the club.

Then the second time was, I want to say for some weekend, Memorial Day weekend, maybe and our flight from Houston got canceled. They were like there’s like no other flights. Everything’s booked and we couldn’t even get that day they were like there’s no private planes that you can take because everything is booked. So we ended up like staying the night and the next morning, we would have not been able to leave until — we were supposed travel home Sunday. They were like the next available commercial flight is Wednesday. So it was basically the only option. But again the club pulled through and made it happen for us and we were not stranded in Houston.

Salmon? I hate salmon. So many people love salmon and if they don’t love salmon, they’re like, but it’s good for you. I’m like, still doesn’t taste good for me.

I mean, I do like tuna. I like swordfish — all that. I’m not big on lobster or shrimp. Neither. Oysters — don’t even get me started on oysters. I got all upset earlier this year, because I was like, “Hot take — oysters are overrated.”

People eat them because they like lemon juice and hot sauce. That’s what you’re enjoying when you need an oyster.

8. What was a big win of mind over matter in soccer?

In the most recent Washington game, I messed up my ankle pretty badly in the first half. I came in at halftime and I was like, “I just need you to tape it and just need to make it through this game.”

That was definitely for me a situation of like, I just I’m gonna ignore what I’m feeling and it’s gonna be fine once I started playing, and I ended up getting an assist. So it all worked out. But that for me for sure.

Mike, our strength and conditioning coach — we all say like, if you get a compliment from Mike, it’s a huge deal. He texted me the next day and was like, “very impressed with your ability to kind of just decide to keep playing. I was like, “wow, I’ve made it.”

I’ve always enjoyed playing Houston. I mean, the weather stinks. But their field is really nice, and their stadiums really nice. And I think that we get to play San Diego at the real stadium that they’re moving to. So I’m excited to play there. I think might be my future favorite.

You know, Portland is always going to be Portland. Their fans are just in a league of their own. So we were We were recently in Portland the day of the game. We were walking down the street, and Katelyn [Rowland] was just singing their chants. I was like, “Katelyn, we can’t!” She was like, “they’re just so good.”

Intense fans! They look you in the eye and yell at you. And you’re like,

Winning the ICC. We just like to rub it in everyone’s faces because of course, the next year, like we had all of our internationals there and they didn’t win, so we’re always like, we’d be, “We beat Lyon without you guys. You couldn’t even do it.”

A lot of caveats there. Okay. I mean, if I can travel anywhere, and money isn’t an issue, I would love to go somewhere sick. So I’m gonna take this opportunity to cross off my bucket list and I’m gonna go to the Greek islands. Eat some incredible food. Swim in the Mediterranean and have a nice glass of rosé a while I watched the sunset.

Look for more articles on Meredith Speck and the entire North Carolina Courage squad throughout the 2022 season here on Courage Country. 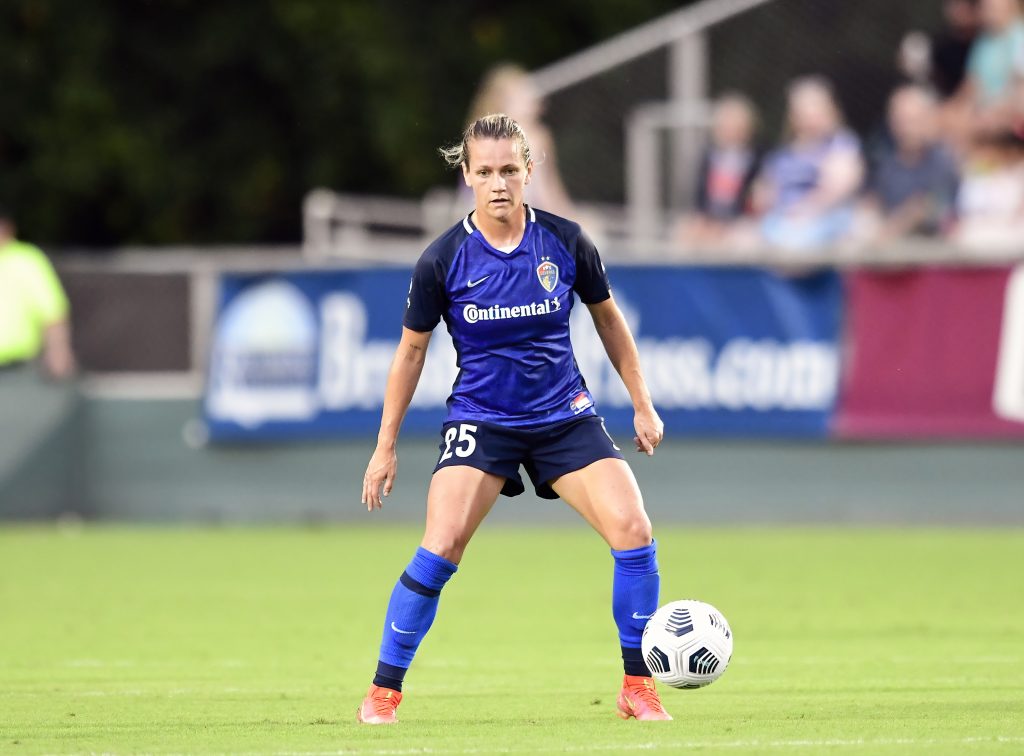