While Courage fans were expecting an announcement regarding a new goalkeeper, the Courage website instead reported a different defense acquisition. Today via their website, the Courage posted that they have acquired Wake Forest University Defender, Ally Haran.

The press release/post on the NC Courage site says that Haran, after graduating from Wake Forest University in Winston-Salem, NC, she signed a contract with UMF Selfoss, a professional team in the top league in Iceland.

The defender played every minute of 19 games with the team last season, netting two goals in the 19 games including the go-ahead goal in a 1-0 win against FH Hafnarfjordur on August 9, 2018.

Role with the Courage

In Courage-issued press release head coach Paul Riley said Haran has a great opportunity to vie for a starting defender job with the 2018 NWSL Champions.

“She has the athleticism, mindset, and ability on the ball to fit right in with our environment,” he said.

“At the end of the day, players must love the process of doing their best every day, all of the time. She will be coming into a nurturing, curious environment and it’s our job to get the best out of her. She has many great tools and in a World Cup year she has a brilliant chance to elevate her game and be a key impact member of our squad.”

Riley’s mention of the World Cup is worth noting. It is likely that many of the adjustments and acquisitions being made leading up to the 2019 season are to build-up positions that may have absences during the World Cup. During the 2019 World Cup, the Courage will be without Abby Dahlkemper, and likely Abby Erceg for the World Cup, and its training camps. With the right work ethic, Haran is likely to see a fair amount of playing time during World Cup events. 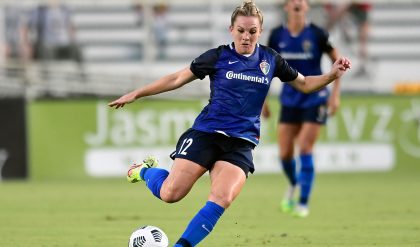