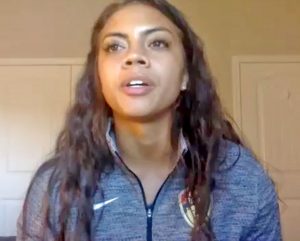 If I wasn’t playing soccer that I would do the other sport that I was doing or anticipated doing in college. I’d try to track — kind of surprising I know. I think I’d try to do track and see how that goes and if I’m successful at that, and I hope I would be because I really just do love being in sports. But If I was able to track are trying to find a job within my degree in business or coaching to stay a supporting role to the best of my ability. I don’t know what career for sure yet. But something sport-related. It’s kind of my world.

Have you compared notes and times with Lynn Williams?

I have not actually. I do know that Jess [McDonald] has a state record still. I know that. I never compared my times with Lynn. She’s really fast. I kind of don’t want to. 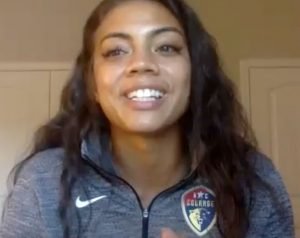 I want to try to be a better cook or a better baker. So maybe I could do something better with that. I wish I was a better cook. Being here, and having to learn how to cook by myself has been a struggle. So I think I would try to pick up cooking I think.

So what’s your latest Netflix binge?

I just finished Lucifer. I also just rewatched for the third time this year Avatar: The Last Airbender so I have a very wide range of bingeing Netflix’s but those are my most recent ones from the past week. 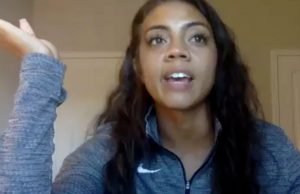 I love it when they say hi. I love talking to them and just asking them questions and seeing what they’re doing because I remember when I would see someone huge. I was always just wanting to like pick AT them and ask them questions. So I really like it if they do to me because It kind of makes my day honestly. I really want to help like younger generations. I think that’s a huge goal I have. That’s why I want to do coaching. I hope you’ll say hi to me. I swear I’m really nice.

I want to improve my back to goal because I like to be playing behind with space and run at the back line, but I think I really need to work on more on being stronger against some center backs and posting up and adding that to my gaming, adding more variety.

Have you been able to see marked progress comping into camp? 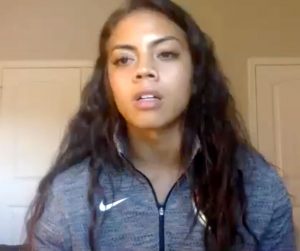 Yeah, I feel like I’ve been growing a lot. My starting was the best after coming out of quarantine and individual training. I would admit, the first time I was training with the team, it kind of felt weird to have people around me and actually passing with somebody instead of a wall or something. It’s been a huge improvement from that at least. I’ve been learning so much since I’ve been here, and I’ve been trying to be a sponge. There’s so much more to learn too, but I feel like there’s been absolute progress.

No idea. I haven’t been there yet. I remember when I was in college, we lined up behind the building and I always would ask our guy that would be with us, our operation manager, I was asking about his day to see what he was doing. I’d ask him about his kids.

I really do like it when we got to meet our little ball kids or walkout kids and ask them questions and stuff. So that’s what I would do during the tunnel, you should talk to the kids. 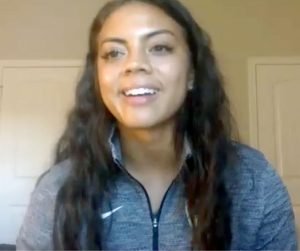 I think it’s really just testing and challenging yourself, testing your abilities, and then how you adjust to those adversity moments. I like challenging myself in that way. But also, competing on a soccer team, you just know you’re competing for more than just yourself. You’re playing for your teammates. You’re doing all that extra running to help the success of your team. That’s why I really do like soccer. It’s a team sport. Those are my two main things about competing.

I always wish and hope my two parents are, and I know they are. My dad always finds a way to get the access code or subscription. So I know they’re always watching. So I don’t have to wish it because I know they’re doing it. 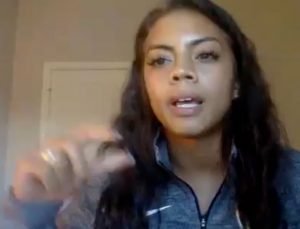 To calm myself before a game, I just always try to tell myself that you’ve done this before. You played soccer before. It’s not too different. He might have more fans and might be something more at stake, but this is something you’ve been doing since you were who knows how long? It could be two decades for me now. This something you love, so don’t freak out about it. It’s something you’re comfortable doing. It’s soccer. You’ve done it before. Don’t freak out.

After a match, depending on the outcome, so if I’m really excited, then I feel like I don’t have to come down — that cloud 9 as long as possible, being excited about it as long as possible. If it’s maybe not the result I wanted, I just need to remember and have short term memory. Yes, you need to learn from what you were doing wrong, but then realize you have another game. You have the next step, the next practice to get better. So those are really the things I try to focus on instead of dwelling on it because I feel that will consume you in the wrong way. But you definitely need to take the time to reflect and learn from it. I definitely try to use it to get better.

Are you one to go back and watch a match, or when it’s done, it’s done?

Sometimes in college, I would rewatch the game the same night depending on it. I definitely am a visual learner — just understanding the spacing on the field. Like, I didn’t realize I had that much space or what I should have done on this 1v1 or on this cross. I’m very into watching film. That’s my favorite thing I would do during the week when I was in college, going to see my coach. It’s just more time to grow and to learn. 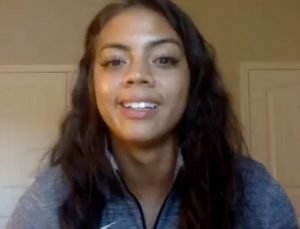 I’m hoping that soccer will get more recognition. I think the last few World Cups, with our Women’s national team being super successful is bringing a lot of attention to it. But then it’s really sad to see we’re not getting all that same attention in the league.

So I think in the next few years, we’re still growing, but we’ll finally get that recognition and attention of how great women’s sport is. If we’re going to have the best team in the world, then I think we should support the league in that country. I think we’re going to have so many more teams at least and really growing fan support, get more televised games and everything. The league is just starting in a small spot, but we’re really growing. I think in the next team years, the league’s really going to be booming.

Question from Nathan Thackeray: What’s been the biggest adjustment to life as a Courage player? 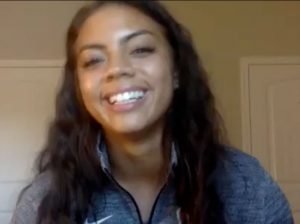 Just to match their speed of play and match their soccer IQ is the best way I can put it. They’re so on top of it. They’re such elite players, and I’m here, so I need to compete with it and they push me to be better, but I need to make sure I do my job to push them to be better, and the team as a whole is growing — just matching their speed of play and just competing with them is the biggest adjustment coming to the Courage.

Even just moving away from being at college, I think that was a huge thing because I was there for four and a half years. Entering a new team environment, they’ve been amazing and super welcoming. It wasn’t that bad. I imagined it worse in my head — moving across the country. But it’s been great.

I’m really happy I ended up here. I didn’t think it was going to happen but it worked out really well.

Like the Courage, were just starting our 2020 campaign midway through the year. Check out our first three 2020 Starting XI Questions: