Cari Roccaro has found a home both on the field with the North Carolina Courage, and in the Raleigh area. She’s seen her playing time and contributions continue to grow on the pitch and within the community. Courage Country sat down virtually last night with Roccaro to answer our 2020 Starting XI Questions.

Oh gosh, do I consider the pandemic? I don’t know. I’ll tell you what, I wouldn’t be doing. I wouldn’t be sitting in a corporate desk job in a big city. I would be doing something around people where it’s very hands-on, helping others. Then I’d be taking vacations somewhere warm and tropical.

Let me think about that. I don’t know, because I feel like that so much time in the day anyway. I’d probably finished binge-watching my Netflix shows a little bit earlier than I do. We’ve been watching Shameless. It’s literally been taking me like a year to finish shameless.

OK, well I’m not going to act like that happens all the time, but it has happened to me. I was at the mall last year and one of the fans just came up to me and got a picture and it’s funny. Then I really remembered her name and see her at every game now. Now I’ve got a new friend. So yeah, I would love for someone to just come say hello not be weird about it

I think I definitely just prepped for the 2020 season differently for the first time in my career, but if I’m going to work on a skill, it’s my speed of play — and seeing, seeing the game quicker and making decisions quicker. 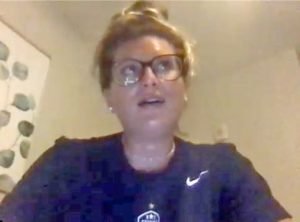 Oh my gosh. Well, I’m usually in the back, but usually, if I’m starting I’m in the back. But if I’m a reserve, you hug every girl on the starters. You hug every single person. You say good luck. Good luck. Good luck. So that takes forever. Then if you’re a starter, you do all the hugging and then I’m in the back with Kristen Hamilton and I’m usually just like, “Hey.” Then I have to like hold hands with my little partner that I’m walking out with him. I get so awkward. I’m gonna say, “Hi! Do you want to hold my hand?” It’s creepy. So I need to work on that. It’s just weird. But that’s all that goes on in the tunnel.

Deb. Oh my God, she just embarrasses you on the field like and she’s my opponent in practice. I’m just like, “You know what?” Today she chipped one of the goalkeepers — dribbled it in and then just chipped someone. I just laughed, and I was like, “Okay, moving on. I’m not even fazed by you anymore.”

That’s an interesting question. I’m someone that just like always likes to do my best. I’ve always been like really competitive and I think it just lights a fire in me to see if I try my best, if it’ll work out for me in the end. I don’t know. I like setting goals and reaching them.

I don’t know. I’ve never really thought about why I’m so competitive. It’s just like really fun, even if I’m doing something stupid like a card game, I’m competing. So yeah, it’s in my blood.

It’s come up about in the bubble, the amount of cards that were being played and just the competition

Yeah, we’re and they got heated! We would look at each other, “Are they actually mad, or are they fake mad? I don’t know. This is awkward.” 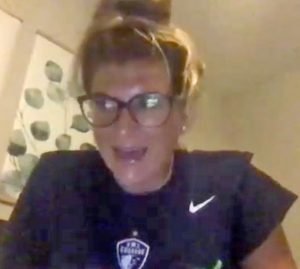 Oh my gosh. At the game or on TV? My parents watch every game, but they’re not able to come to see me every game, so it’d be cool if they’d be able to see me in person, every game.

And I actually have always said to them, they need to get to a game in Portland, because to experience the Thorns stadium, you can’t explain it. Every time we play them I’m like, “Did you hear the crowd? Did you see the crowd, though?”
I’m like, “You have to come to experience that!” So yeah, I guess I’d say my parents, specifically out of Thorns game if they could get to one. 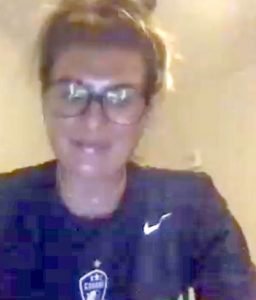 OK, so I always tell myself don’t be nervous until after the national anthem. So if I tell myself that then it gets me through the warm-up. Then after the anthem, I’m like, “OK, well, now I’m nervous.” But then I say, “OK, well I only have a minute or two to be nervous.” Then I just say, “connect your first pass.” So I’m really nervous for like a minute or two for the whole time if that makes sense. I just kind of trick myself into being like, “Don’t be nervous until after the anthem. Okay, now you have like a little mini time to be nervous and then connect your first pass.”

I guess if I don’t connect my first pass, I’m like, “OK, well, connect your second one.” Who cares, but I try to just keep it simple in the beginning — stick a hard to tackle or show that I have some energy, then I kind of just get in the flow from there.

Is it different when you’re starting versus coming in as a sub?

It depends. I think I’d rather start and get in the flow because I think subbing into a game is much more difficult, especially, I guess it could be good or bad if Paul’s like, “OK, get up. You’re going in.” I don’t have time to be nervous, but oh gosh, I don’t have time to think about anything. So it’s a good or bad thing depending on the game. Yeah, it could go either way. I think it’s easier to start and get in your flow for sure. 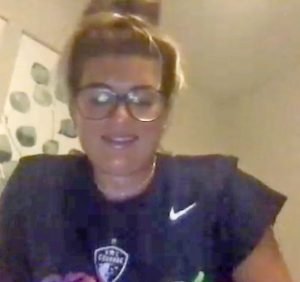 I see the NWSL following in the footsteps of the MLS. I don’t see why wouldn’t. I think it’s going to just be a ton of more expansion, money, and growth. Yeah, I mean what, the MLS has 26 teams right now and they have a couple more coming in. I mean, we’ll get there. I think they started out very similar to us. I used to hear stories about some of them and what they used to deal with and look at them now. They’re all doing just fine financially. They get treated really well. So yeah, I think will definitely follow in those footsteps and I will not be playing at that point, which kind of stinks. But at least I get to say I was a pioneer and go to my grave with that. I was a pioneer of the NWSL.

Question from Lauren Milliet: If you could travel anywhere in the world sans Covid where would you go first and why?

Italy. It’s on my bucket list. Wait. Let me see what I wrote down. I wrote something specific though. I’m Italian, but I don’t know much about Italy. Bucket list — it says [laughs], the fact that I checked my phone, and this is all it says! It says, “Go to Italy. (Good pasta)” So I guess I want to go eat some pasta in Italy and I guess I want to be near the coast. I don’t know. I will try to go there I guess. That’s funny — literally that’s what written.

Look for more articles on Cari Roccaro and the entire North Carolina Courage squad throughout the 2020 season here on Courage Country.