In a North Carolina Courage backline that looks much different from seasons past, Carson Pickett has been one of the constants so far in 2021. With the Challenge Cup in the rearview mirror, the Courage now are in full training mode for the 2021 regular season.

Pickett sat down virtually last night to be the fourth to answer the 2021 edition of Courage Country’s Starting XI Questions. 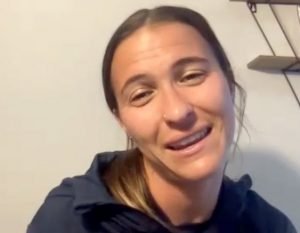 I got to spend so much time with my family obviously playing professional soccer were all over the place when I’m not and then it may sell them in Australia, which is so far away from America. I’m lucky that my parents got to come over two out of the three years, but the best thing to me is definitely being able to see my parents every single day and getting to live with them for a little while, and getting to see my grandparents, my aunts and uncle, and cousins. Family is a top priority for me anyway, so being able to spend a lot more time with them without knowing that that was going to happen, that’s just amazing.

You’re not just out there working hard for yourself. You’re working for the betterment of the team. I think that that’s something that’s massive here. It is about you and your development, but it’s really about the team — the chemistry, here again, and the culture is just unbelievable so the one thing I would say is that I’ve learned from this team, especially is that you have each other’s backs, and you work hard for each other.

That’s a good question. I think, obviously, Abby Erceg is our captain and she’s amazing. She’s super down-to-earth, and I feel like, no matter what problem I would ever have — I haven’t had any problems here, but if I did have a problem or you know just needed some advice. She’s just so experienced. She’s been all over the world, and she’s been a captain on this team for a while. So I think that she’s probably the one that I would go to if I ever needed anything or some advice or just have a chat.

I would say the biggest thing for me is obviously this isn’t one of the highest paying jobs that anyone can have, so I think my biggest moment my biggest “aha” moment is that. We’re really playing soccer for the love of the game because we truly love it. We’re not making a killing off of it and we’re not getting super-rich. Just to see how much you love the game and to go through anything and everything to continue to live your dream, I think that’s been one of the coolest things.

It is a lot of ups and downs, but to live out your dream that not many people get to live a dream that they wanted to. Some people want to go to space. Some people got to do that. A lot of people didn’t get to do that, but to actually live out a dream that you had when you were a child is just amazing. I think that’s definitely been my “aha” moment &mdash how much I really truly love soccer and how cool it is that I get to continue to live my dream.

Obviously, the fitness level here is very high, and luckily I feel like I came in pretty fit. You can just watch North Carolina play, and you can see that they’re fit. I didn’t have anyone say, “Make sure you’re fit,” because you can see that right away when I’m playing against them.

I would say Mia Hamm, just because I mean what little girl didn’t love her? She was amazing and I just like I love the way she played, and obviously, I’m a defender and she was an attacker. So it was cool to study her game and to see her different runs in the box and the way that she played was just amazing back in the day, and so I think that that was probably my role model. Obviously growing up, we didn’t have tons of opportunities to watch women play soccer.

There wasn’t a stable league, so just sort of going off the national team yeah, I would say Mia Hamm just because she was such a competitor and I felt like she was one of those people that she wanted to win, no matter what she was playing. If it was horseshoes or soccer she wanted to win just as bad. I don’t know her, but I was watching her on TV. That’s how I feel like she would be so I think that that’s really cool.

That could describe a lot of current NWSL players too

Yes, everything’s competitive. I remember in Orlando, we had a day off and we had a cookout. A bunch of us were playing beach volleyball and I was on Marta’s team. You would have thought it was the World Cup. She was like, “Let’s go!!” I was like we’re just out here to have fun. Not to her because she’s just such a competitor, and I just think that’s awesome. 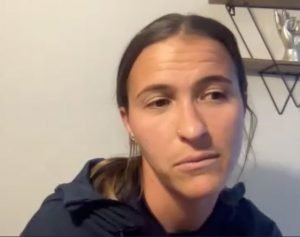 Yeah, I think if soccer wasn’t an option, I would definitely stick with tennis. It was just it was so fun. I felt like it was still a decent amount of running, and just to be able to practice, and you can go out and hit with anyone. I mean, I feel, like most people can somehow play tennis. My parents both play tennis and my grandmother actually still plays tennis at 80 something — late 70s, early 80s and she still plays tennis nearly every day. I feel like it runs in our family.

So, right now, my roommate Rylee [Baisden] and I are watching Cable Girls, which is just on Netflix. That’s what we’re watching together. Personally, I hate to admit this but it’s the amount of times I watched it — I have watched Schitt’s Creek now three times. I’m finishing my third time of watching every single season and honestly it’s just such a feel-good to me I just love just hanging out and not having to think and it’s just such silly humor. When you’ve been thinking a lot during training, it’s nice to come home and just watch something really silly so Schitt’s Creek is definitely something that I’ve been watching and I’m about three times through now.

Question from Diane Caldwell: What advice would you give yourself as a kid looking back now and on everything that you’ve achieved in your career and what is the one piece of advice that you would have given your younger self?

I would tell myself to have no fear and to never dwell on mistakes. I think that I would probably tell myself that right now, obviously, being a professional soccer player or athlete you know, we want to be perfect all the time. We do make a lot of mistakes, but you have no time and in the professional league to dwell on that. I’d tell my younger self and I tell myself right now to move on. You’re going to make mistakes. It’s about what’s done after that mistake that matters most and that shows who you are as a true person and a true competitor.

Look for more articles on Carson Pickett and the entire North Carolina Courage squad throughout the 2021 season here on Courage Country.