With Visa issues getting into the country, center back Irish national player, Diane Caldwell has only gotten two weeks of practices in so far with the Courage. But she’s already invested in the club, its hard work, and its culture.

With national team friendlies happening this week, Caldwell connected all the way from her Ireland hotel room Tuesday to be the third to answer our 2021 Starting XI Questions.

Probably just the daily contact of not seeing my teammates. You know it’s a team sport and you motivate and inspire each other while in the presence of each other — just that camaraderie you know, even the personal contact — the high fives, the hugs, and not seeing people probably was the biggest one. 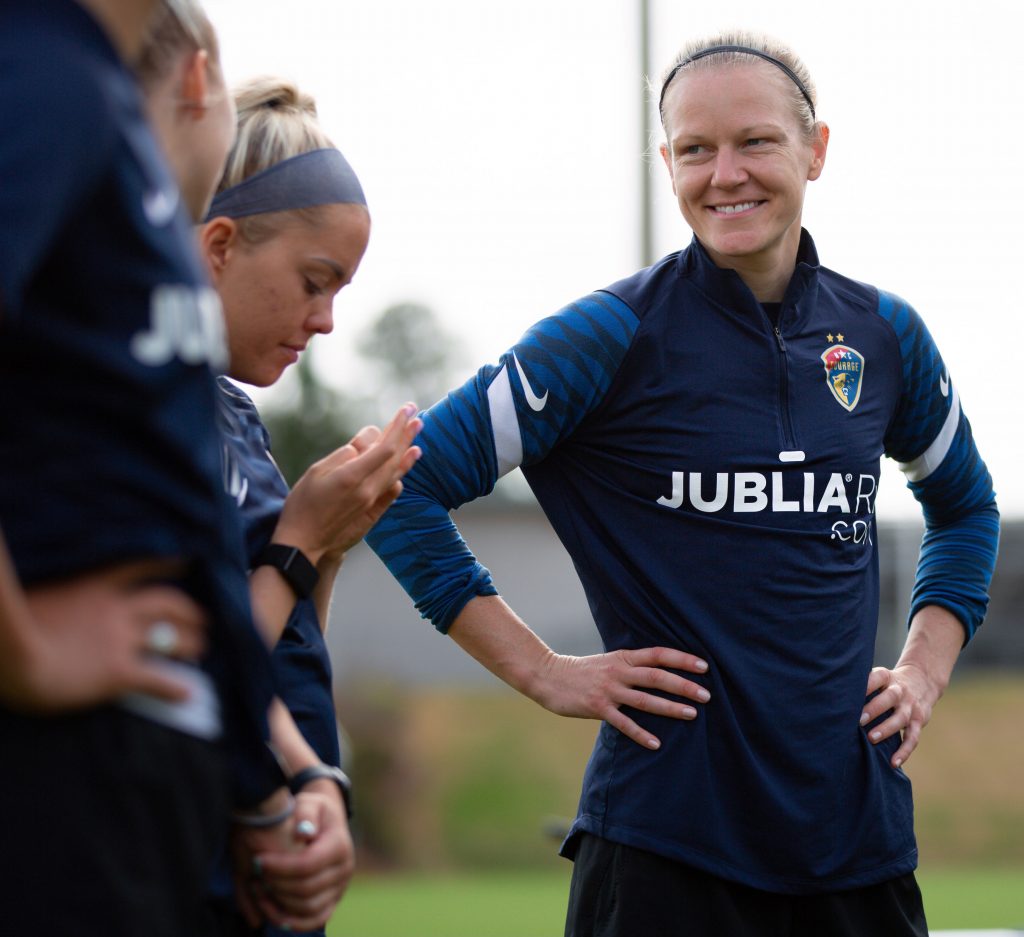 I actually think it’s brought us closer together in a lot of ways because obviously everyone was in the same situation and in the same boat. You don’t have contact with your loved ones and you’re restricted to just doing Zoom calls, Facetime, and stuff like that. It really makes you have another outlook on things and self-reflect and see, “Okay, how am I living my life? Am I putting enough time into my family, taking them for granted?”

For me personally, I feel like my family has come closer in this time and again just because it’s been taken away and, sadly, sometimes you only learn when things are taken away from you. So I think that’s a major silver lining that a lot of people can take from it. 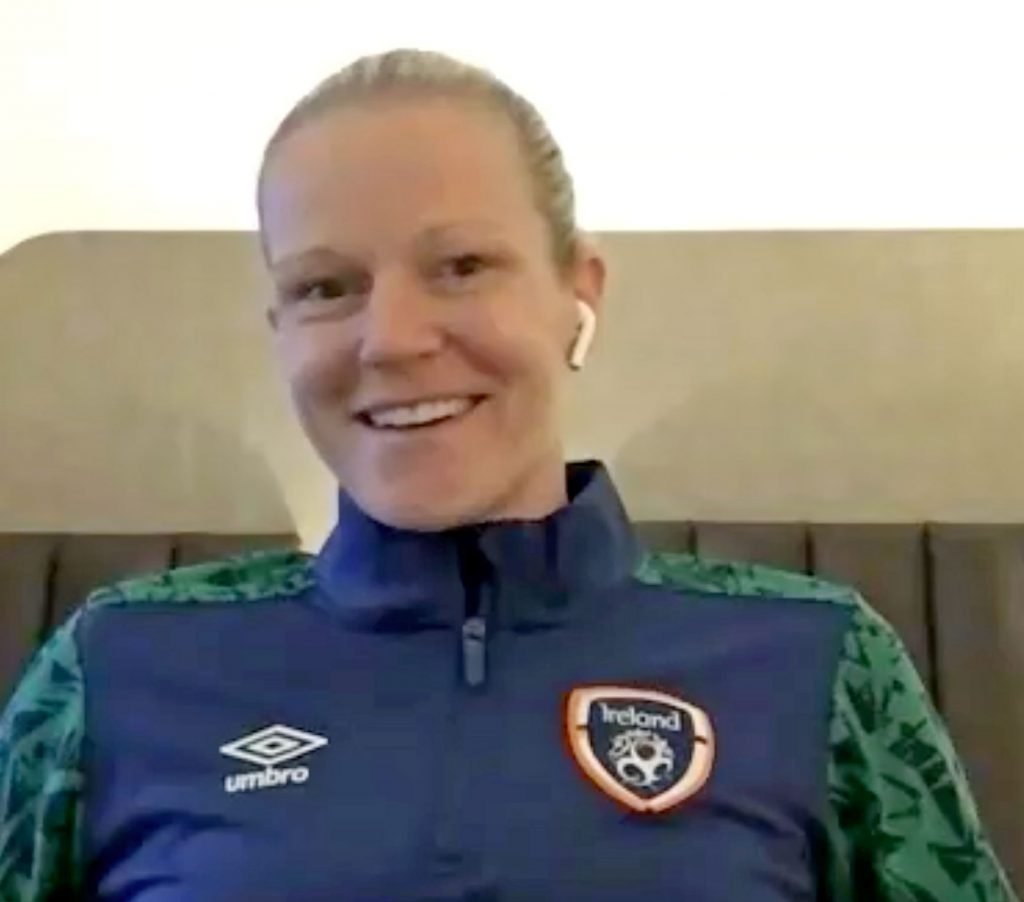 The daily grind — relishing that, and treating that as a privilege — not to take anything for granted. Especially during the whole COVID you know, we’re still able to do what we love. It’s our job. It’s our passion. There’s a lot of people in very difficult situations right now. I’m just very blessed and very privileged to be where I am and to be able to do what I love and still have a job.

It has to be my fellow Irish. It has to be Sully of course. She’s the one I’ve known the longest, as my fellow Irish national teammate. But yeah definitely will be Sully, but that position is up for grabs, just sayin’. We’ll see how she does and then maybe I’ll move on to someone else. [laughs jokingly]

How long have you been crossing paths with Denise O’Sullivan?

Yeah, gosh I don’t know when she first got into the national team. She’s obviously a little bit younger than me but I’d say that at least the last 10 years for sure.

What’s been your biggest aha moment in your professional career so far? 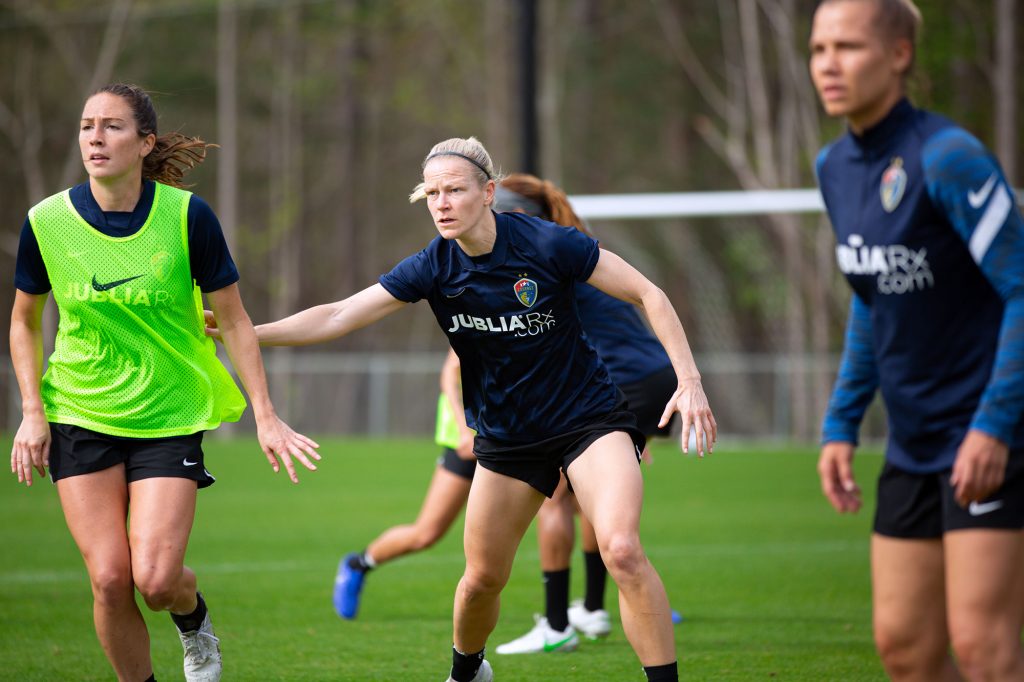 There are many, and there are a few in different kinds of themes in terms of on the field and off the field stuff. But, to be honest, I think the one where I learned the most was when I was at my lowest and when I was up against a difficult situation, and one where I was probably at my lowest. I think until you are at your lowest you only realize how actually strong, you are. At that point in time, I was in Norway and things weren’t going well. Until you go through those hard times you only realize how strong, you can be and then you build resiliency.

I think one of my strongest assets as a player is my mental strength, and again that’s built up over time of having setbacks, having obstacles, having things that didn’t always go well, having coaches that doubted you or having to prove them wrong. Things like that have built up my resiliency over time and my mental strength. I think that was an “aha” moment for me — not at the time, but when I look back. Then I was like, “Well, that has made me so strong that nothing can break me now.” 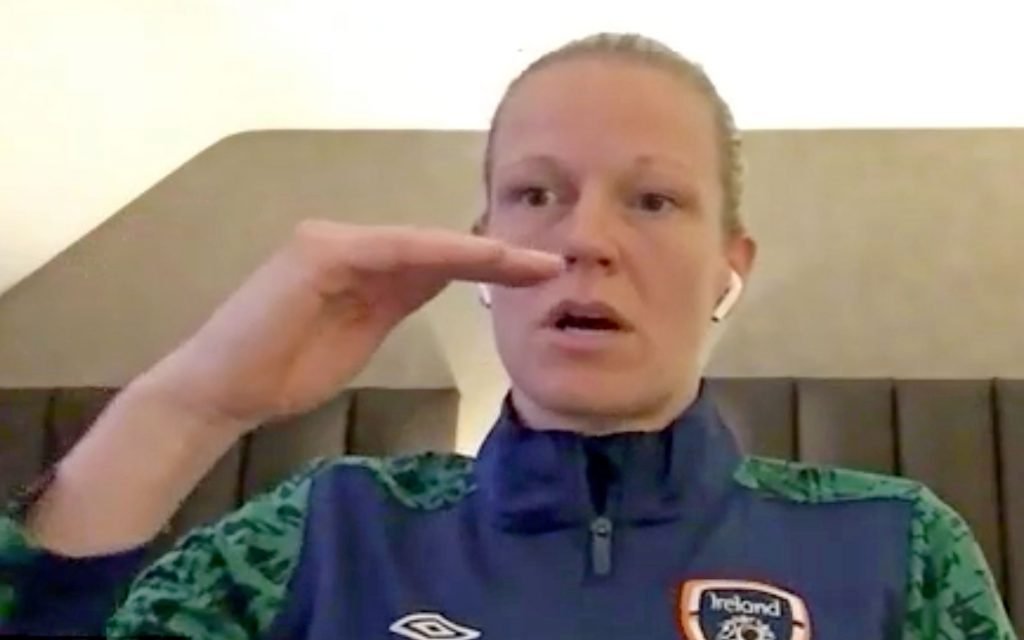 It’s the intensity. It’s every day, and the standards don’t drop. It’s like this [gestures high level] the whole time. That’s a shock to the body when you come in from somewhere else, especially in my case, having not trained with a team in the build-up to joining the Courage so yeah That was a big shock and just adjusting to that intensity every single day but, again, the body will adapt the mind will adapt everything will get quicker and everything will get more — something that I can excel in and my body can adapt. Then I can start to really apply myself and show myself as a player. 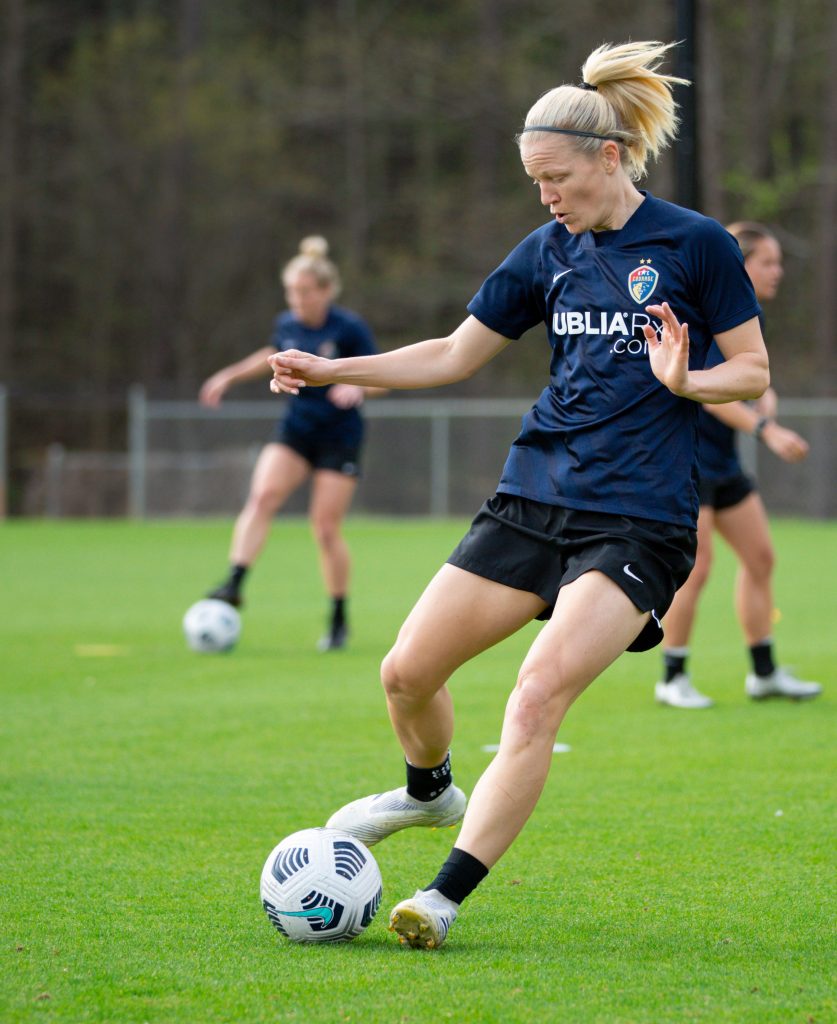 My role model was someone you probably never heard of, but she was a player for the Irish national team, and she met me when I was a young kid. I was probably only 12 at the time and didn’t really know what possibilities were out there for me in the world of women’s football. I met her and she showed me all of her caps that you have for playing for Ireland. I was just in awe of this woman and she was one of the first to have left Ireland and played professionally. She played professionally in Japan and in England.

She’s currently now coaching in the States actually — Claire Scanlan is her name. She was just a massive inspiration from me. She was someone who I wanted to follow in her footsteps and do the same thing that she was doing. Actually, it’s funny within a couple of years we ended up playing with each other because I made the national team when. was 17 and she was still playing at that time. So I ended up playing with her, which was a massive special moment for me and I’m the one that I will always remember. 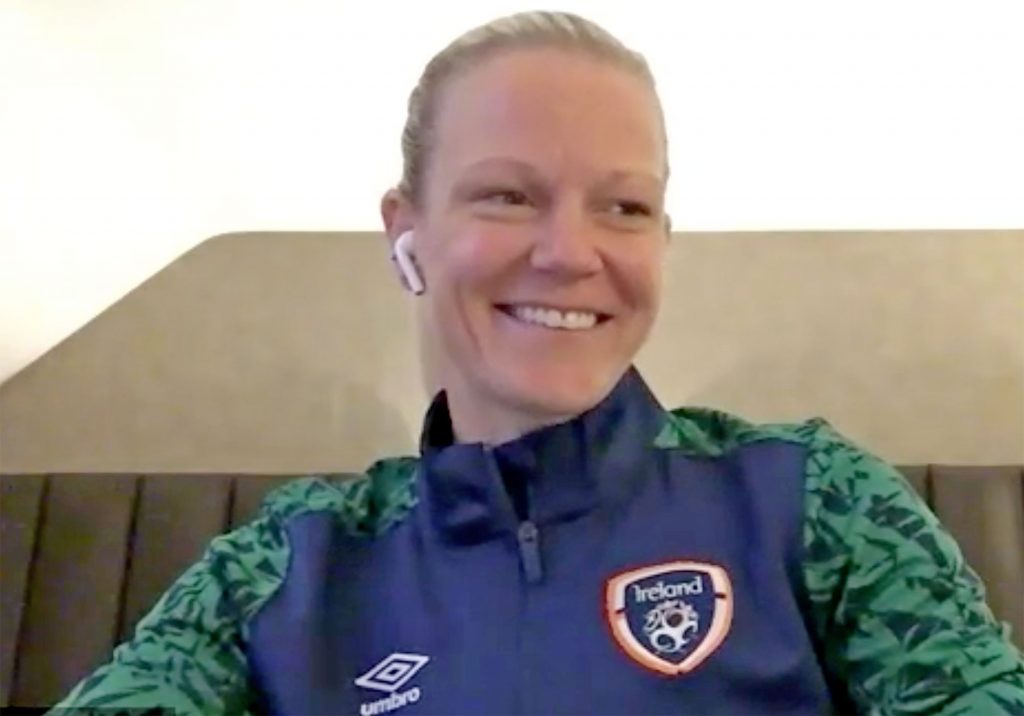 My essential possession wow, the first thing I think always make phone but that’s such a bad answer. You don’t want to do be without your phone. I’m kind of looking around my hotel room.

Actually, I probably would say my black roll, my foam roll. I always bring that everywhere with me. Yeah, I’m going to say my foam roller. People are going to laugh at my answer, but it is what it is. You’ve got to look after your body.

You know what, I’ve never played it, but I have such admiration and respect for tennis. You’re just out there on your own. I think as we talked about before, that is a massive mental game. You know it’s nearly you and your head really out there on your own and I think I’m particularly in awe of it because I’m in a team sport environment, then you can mean on your teammates and they can help you in tough situations, but I think tennis is really admirable, massive skills for its class. Yeah, maybe tennis — I’d like to think I would have maybe tried my hand at that. 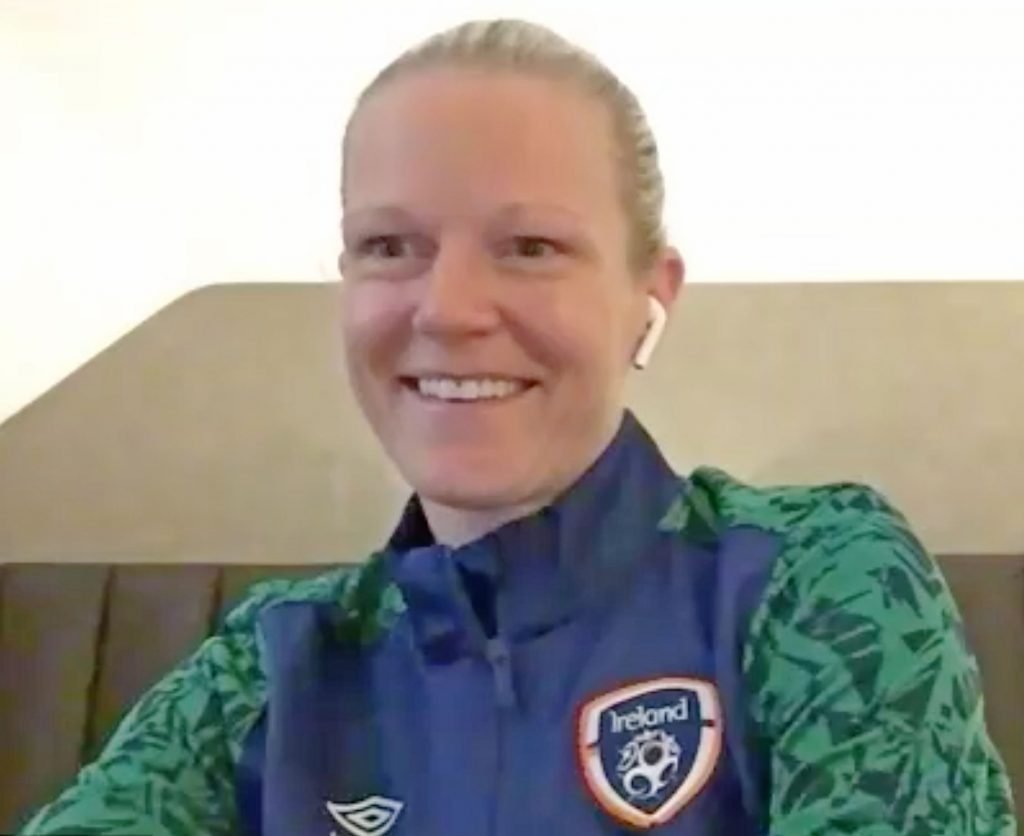 I’m not massively into series, to be honest. It’s probably a boring answer, but I just watch so much football. I binge on Monday Night Football It’s a British show that’s on Sky Sports led by two really class analysts, who are ex-players, Gary Neville and Jamie Carragher. So to be honest, I watch reruns of MNF. People are going to laugh at me with this answer, but I watch a lot of football. I watch Match of the Day, highlight shows, and MNF are my favorite shows.

They do a good job analyzing the weekend’s games and these are two ex-pros. They just give a really good insight into the games and analyze things in a different way. They do an extra hour before the Monday night game and an hour after, so it’s really kind of a debate show, hot topics, and talking about everything in the world of football.

Question from Merritt Mathias: What’s the weirdest thing you’ve experienced since being in America? 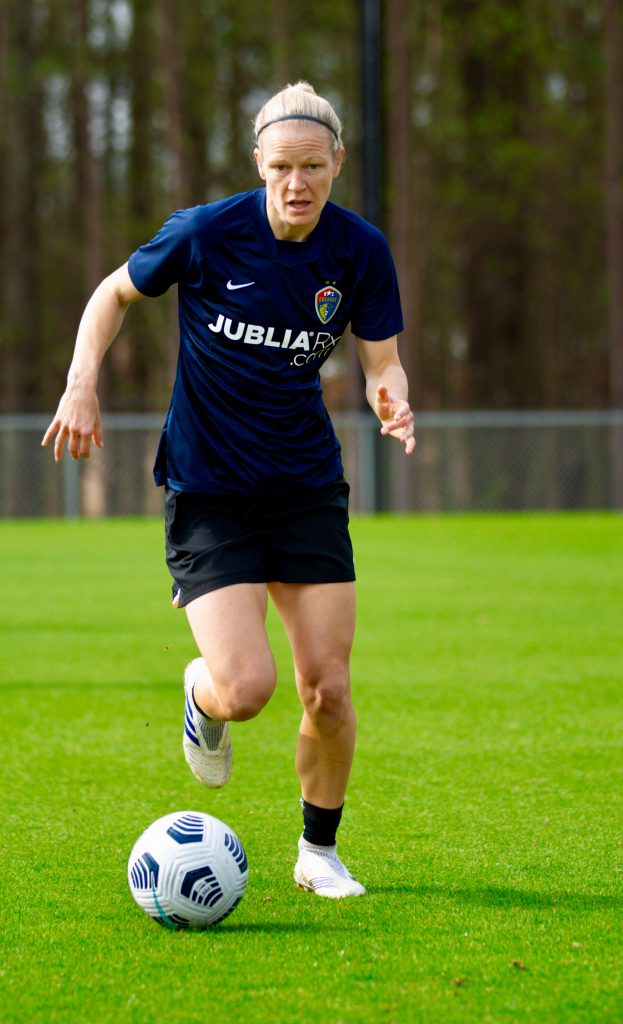 The weirdest thing for me is that they have applesauce in the locker room in a little packet that they can just drink. Is this a normal thing in America?

I guess it’s like a high-energy, high sugary snack. They’re maybe the healthy equivalent, but I’m just used to like the energy gels. I always have them at halftime.

I was like, “Why is there applesauce in here?” but yeah, I guess, maybe it’s just kind of a quick energy snack.

Look for more articles on Diane Caldwell and the entire North Carolina Courage squad throughout the 2021 season here on Courage Country.