Skip to content
Home In the News First Pre-Season Schedule News: Courage to Take on Orlando Pride in Doubleheader 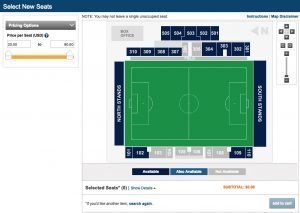 The announcement says the pre-season doubleheader, called the Friendship Cup starts with a 1:00 pm kickoff of the Courage facing the Orlando Pride, followed by an international exhibition of NCFC versus Necaxa of Mexico’s Liga MX with a 3:30 pm kickoff.

The pre-season match up is an additional fee for season ticket holders and single ticket purchasers alike. Prices for the doubleheader look to range from $20 to $90 of those currently available. Starting this morning at 10:00 am, season ticket member have an exclusive 48-hour window starting (through Friday, February 22, 2019, at 10:00 am)

The official press release said that ticket members can purchase through the new Ticketmaster Account Manager page, or by calling the Coastal Credit Union Box Office at 919-459-8144. Our personal Courage season tickets seats were not shown as available through Ticketmaster portal, but calling the box office directly, the tickets were available.

Because the Courage schedule has not been released yet, the salesperson thought that tickets may not sync to the Ticketmaster Account Manager portal yet, but said that the schedules are expected to be released later this week. The club is also in the process of transferring old accounts from a previous customer relationship management (CRM) software package over the Ticketmaster one, and inputting the already announced NCFC schedule into the system fully as well.

The North Carolina Football Club previously announced the switch to digital tickets at the end of January, and will be utilized both for season ticket holders of both the NCFC and Courage teams, along with the purchasing of single-game matches.

General public sales for the Friendship Cup go on sale Friday, February 22, 2019, and the club is offering a special promotional package that includes both the NCFC and Courage Friendship Cup pre-season matches, as well as a choice of tickets to the season-opener for the NC Courage or North Carolina Football Club. The NCFC home opener will be on March 9, with a 4:00 pm kickoff against Louisville City. The Courage home opener will be on April 13, with the opponent and kickoff time to be announced soon.

Friendship Cup ticketholders will also receive exclusive access to a special Necaxa closed practice, as well as a Necaxa player autograph session the day prior to the match, with a time to be announced at a later time. Ticket holders will show their digital game tickets for entry into the event.

Earlier this week, season ticket holders received an email announcing that the beer for the year promotion would return for the 2019 season. The promotion, in its second year, gives all season ticket holders 21 years or older, the opportunity to get a single canned beer at every home match throughout the season. The beer for the year promotion will continue to have a paper ticket system. The club is still determining how and when the vouchers will be distributed.

Ticket representatives at NCFC said the Courage’s pre-season and regular season schedules are expected later this week. If you’re like us, you’re waiting to pencil in vacations and other spring and summer plans until the NWSL schedules are complete. It looks like those calendars will be able to be solidified by the end of the week.

Via Twitter, Courage head coach, Paul Riley also said that opponents in the pre-season would include college friendlies against Clemson, Wake Forest, the University of North Carolina at Chapel Hill, South Carolina, and Virginia. Riley’s tweet also referred to an NWSL pre-season surprise — obviously referring to the pre-season matchup against Orlando.

Pre season games vs Clemson, Wake, UNC, South Carolina, Virginia plus an NWSL surprise!!
Waiting on a few times… I hear league schedule complete. An opening day cracker on the cards!! Let’s get it out & get fans pumped for some great football this spring/summer #follownoone https://t.co/6Vagw70ptQ