Skip to content
You are here
Home > Players > Abby Dahlkemper > 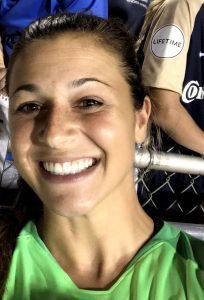 She was our first interview at the beginning of the year, and a family favorite since the Courage first arrived in North Carolina. Earlier in the year, we decided to send her a care package over to her current home away from home in Sweden. But due to the USPS’ ineptitude, the package took forever to get to Sweden.

D’Angelo’s now in training for the 2019 World Cup, with their first World Cup match coming Monday, June 10 against Cameroon. So the care package now will sit in Sweden waiting until D’Angelo and her Canadian national team and World Cup are done.

Within that care package, we included a USB drive with a compilation of her former Courage players, saying hello. We wanted Sabrina to see the messages prior to the World Cup, so we posted it for her to see online and wanted to share it with #CourageCountry.

Good luck in the 2019 World Cup, Sabrina, and best of luck in Sweden for the rest of your season over there

And @jmac1422 gets in for the last few. #courageCo

Check out the first 2020 #StartingXIQuestions with

Haven’t worn this in awhile. How about tonight?

There’s going to be some major work done at Wake

First interview of 2020 for us coming up tomorrow,

Look at us getting all official. Ramping up for 20

In case you missed it, we just snuck another #Star