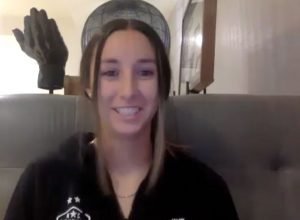 As one of the five 2022 College draftees signed to a 2022 contract for the North Carolina Courage, Haleigh Stackpole is ready to make her mark in training with her sights set on making the starting XI. Read on to learn a little bit more about Stackpole as our second Courage player to answer the 2022 edition of the Courage Country Starting XI Questions. 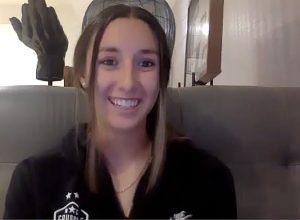 I’m always looking for ways to become a better version of myself so failure isn’t what pushes me. It’s just something I don’t accept. I get up and grind because I love what I do and the feeling of success you get when you achieve something that that you’ve worked so hard for. But if I had to say something that motivates me it would be my family and God. I do what I do because I love looking back and seeing and appreciating the ways God works in my life and carries me through the process.

Maybe Carson Pickett. I mean if you’re just looking at her externally, you can see that she has differences and sometimes people can underestimate her, but she really doesn’t care what people think, and she is always giving her best effort and always working hard. 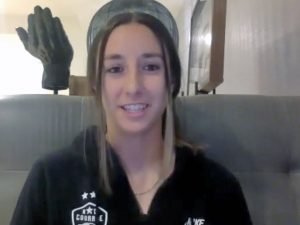 Well, you just can’t let yourself accept failure. You always have to look at setbacks if that’s what it is, as a way to grow and take what you can, learn from it, and make yourself better in that situation. So the next time the same thing happens, you’re prepared. So, again just never really let yourself accept failure because you won’t actually fail unless you say you have — so just staying consistent and always looking for way to better yourself.

Well, I really am into rap. I love rap music, but sometimes it’s just a little too harsh, but still it’s my go to. I’d say anything Drake. I love Drake. Any of the songs will pump me up.

If you had to pick one track to put on repeat?

Well, I’m not even going to say a Drake song. I’m going to switch it up and go with “Humble” by Kendrick Lamar (Apple Music / Spotify). I know I said Drake, but that song really just popped in my head. It’s a good one. 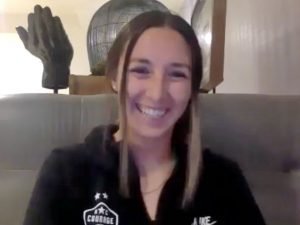 Well, it’s been short three months. I guess just the networking that we have here. We have so many resources for things in soccer and out of soccer I don’t know if I’ve taken advantage of it because I pretty much done the same thing for the past three months, so I guess it’s something I need to look into.

Meatloaf — my roommate and I just talked about this the other night — our favorite and least favorite foods and it’s definitely meatloaf. I don’t know if I ate it too much as a kid or what but I just can’t stand it.

8. What was your first big win of mind over matter in soccer (or elsewhere)? 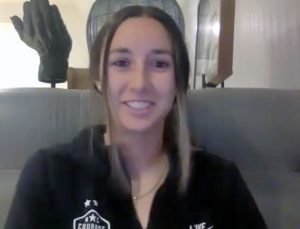 I don’t know because I’ve always been pretty mentally tough I’d say. I never set limits to what I can achieve, whether that be like a fitness test, like the beep test, or how long I’m going to be playing in a game. I just go until I can’t go anymore, and once I get to that stage, I just push more.

People say I have a strong engine so I don’t like to give up.

I’d say our home field at Ole Miss. It was such a great atmosphere, especially when we would have the Greek life out on a Thursday night and they’re just making so much noise. The environment’s really fun to play in. 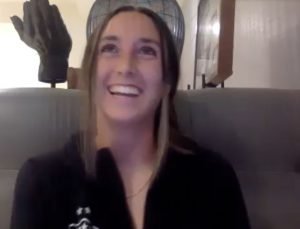 I’d say this past season, or really the whole four years I had at Ole Miss, I think I was very successful in those four years from freshman to senior year but, more specifically, this last season I moved up to a new position and was playing right forward and I just again, set no limit for myself and I ended up being the top third assister in the nation. We had a really good season. Unfortunately, our NCAA tournament run was not so good, but for the whole season, I think I set some standards and broke some records, obviously, for the Ole Miss.

11. Question from the last player (Kiki Pickett): What’s the secret to the best movie and or what’s the best smoothie recipe? 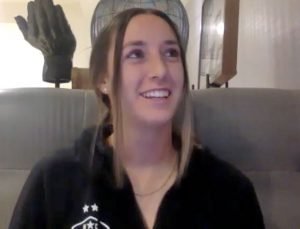 I love making smoothies, so this is a good question for me. I think using frozen fruit if you’re making a fruity smoothie always use frozen fruit. It makes it so thick and smooth. I mean you can use normal fruit too, but it’s more liquidity if you do that.

The best smoothie is one that I make. It’s spinach, oranges, pineapple, lime juice, a little bit of water, and ice. It tastes so good. It’s really citrusy, so if you don’t like citrus it’s not good.

Then Kiki followed up with if you had to make a homemade smoothie but you didn’t have a blender, on the road or something what do you do?

I don’t know. I guess mash everything with a fork and maybe use a whisk. That’d be a good idea. Maybe put everything in a bag and shake it. 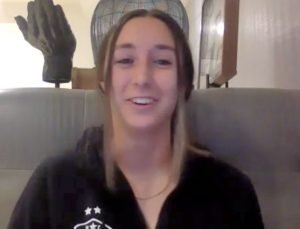 Look for more articles on Haleigh Stackpole and the entire North Carolina Courage squad throughout the 2022 season here on Courage Country.