Midfielder Havana Solaun is the newest addition to the North Carolina Courage’s roster, shoring up the team’s midfield in the absence of players like Denise O’Sullivan and Sam Mewis. Solaun is no stranger to the NWSL though, starting her professional career with the Seattle Reign in 2015. Solaun is also a member of the Jamaica women’s national team. The midfielder sat down with Courage Country virtually yesterday to answer our 2020 Starting XI Questions.

If I didn’t need sleep. I love sleep. I need sleep. I think I would spend the extra time outdoors and in nature, exploring. I feel like especially in this area, there seems to be so many different cool outdoor places to experience. So I think that’s what I would do.

I’ve gone on some [local] nature trails. But there do seem to be so many when you Google, “what’s a good trail?” and then there’s like 17 different ones. Where do I begin? I feel like this area just has a lot of that to offer.

Taking more shots. I think I’m an attacking-minded player. And I think that I need to take more risks in that aspect of my game. 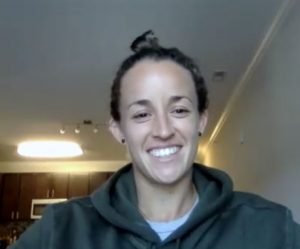 I think right now it seems to be silent in the tunnel, a little bit, but I would think before, there seems to be talk with the person right in front of you or right behind you about the game. If somebody’s nervous, it’s like calming them down. I think it’s just more in that moment, everybody’s sort of trying to get into space they need to get into. If you see somebody who’s like looks really nervous or, you know it’s their first NWL game, maybe there’s a few words of encouragement here and there.

Probably Debinha — I’ve been an opponent before and it’s not very fun. Being on the same team is much more rewarding.

For me, I think it’s growing. I think that in highly competitive environments, it forces you to ask a lot of questions about yourself, and I think that can be difficult, but I also think that it really provides an arena for growth. So for me, that’s why I’ve always loved and been drawn to competition because I think that it pushes you and it brings out the best in you and the other players around you.

What would you tell your younger self about competing? 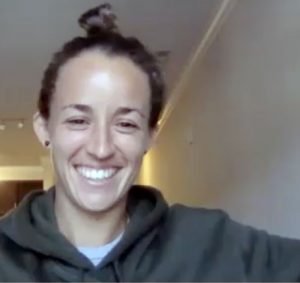 I would tell me to be present. When I look back on my career, I was always looking forward to the next step. I was, you know, when I was in high school, I couldn’t wait to play college soccer. When I was in college soccer, I couldn’t wait to play in the pros. I always, towards the end of my four years, I was like, I can’t wait to get out of here. I wish that I was able to stay present and be like, this is college — such a stable environment to grow. You’re on the team for four years. It’s guaranteed. The coaches, there’s not as much changing and I think that that time should be embraced. I know that there are times where you kind of feel over it, or maybe you’re just ready to be done with it but I would say try to be present. The future is always going to come. You are inevitably always going to be done with college soccer. So while you’re there, enjoy it, because you’re going to miss it.

My mom. I mean, our games are televised but I think growing up, my mom is always a really big supporter of me. So I think when she watches, to me, that means the most. 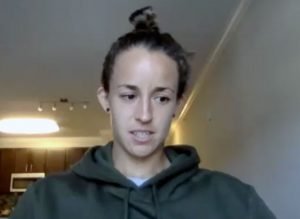 I would say leading up, I try to remain relaxed and how I think I do a lot of like leisurely things leading up to the game. I like to read before games and a lot of times, it’s kind of like an active meditation, where you’re just like breathing. You’re just focusing on breathing and you’re trying to stop the stream of thoughts and focusing on your breath helps with that. So for me, it’s literally trying to feel as present as I can in my body leading up to the game.

Post-game, I think the biggest struggle is after the game, my mind is reeling with every play that happened in that game that I was part of. What could I have done and usually in the evenings, I give in to the fact that I’m gonna need an hour or two hours to let that real go but then once I finally am getting in bed is when I kind of cut it, and I’m like, “All right. There is tomorrow and you can play it through all tomorrow. You need to sleep. I do the same thing when I’m trying to just shut it off. I just focus on breathing and I try to allow my mind to just chill out a little bit. 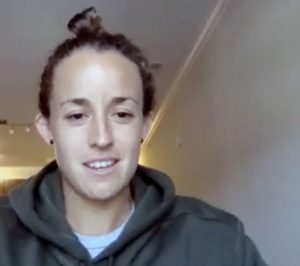 I would hope that in the next 10 to 15 years that we can use this base and foundation that has been laid and continue to expand it. I think that obviously with new teams coming in that’s like a direct expansion of this league, I think once you built that it would be important to start to get communities engaged with these teams and create that kind of connection with also the youth programs below. I think that would also help. That’s the way the game is going, and I hope that it continues to go that way.

Question from Cari Rocarro: What is your go-to five-course meal you would cook if you were having a dinner party? 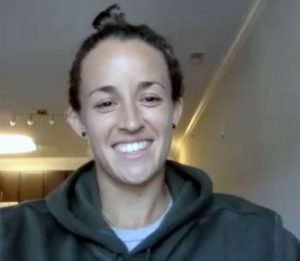 So if I was cooking. How do you even get five courses in? Okay. First, I’m going to start with hummus, avocado, and chips as a starter. Then two would be mozzarella sticks as we’re sitting down at the table, eating that. And then, a salad, like a really nice salad with sprouts, beets, and cheese. Then for the main course, I would go for pork chops, yucca — some fried yucca in some coconut so it’s crispy. Then some broccoli. Dessert would be homemade ice cream — chocolate chip.

Look for more articles on Havana Solaun and the entire North Carolina Courage squad throughout the 2020 season here on Courage Country.