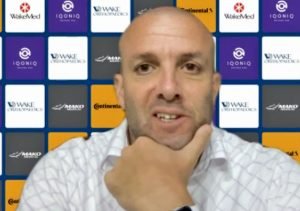 Earlier in the year, Sean Nahas was rumored to be in the running for the newest NWSL franchise coming into the league next year. That fell through, but often things happen for a reason. Now Interim Head Coach of the North Carolina Courage in the aftermath of the Paul Riley scandal, Nahas is helping the NWSL club he’s most familiar with having a little continuity, and more importantly, start to heal. 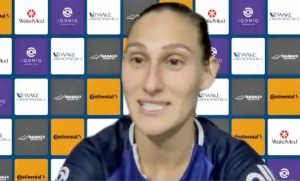 “It’s clearly been a very difficult time for our club,” Kurtz said.

“Sean — he’s been around us for a really long time, so it’s really nice to have someone who was familiar — especially during this crazy time.”

Kurtz continued that Nahas has been phenomenal in his current role.

“Our practice sessions are extremely intense and everyone’s ready to work — work for him and for each other. He’s been so good about making sure we feel supported and heard and everything on and off the field because right now, a lot of what we’re dealing with is off the field stuff,” Kurtz said.

Kurtz said that on the field, he’s an incredible coach.

“[He] really knows his tactical stuff, knows his technical work and he inspires us all to continue to get better. I 100% think he deserves to have the interim taken out of that title. He deserves the head coaching job and I think the club would really be missing a very big thing if they decide not to do that. I think that would be a very big mistake on their part,” Kurtz said.

She said he has been fantastic in the past few weeks.

“…he’s been given a crap deal to start off with, and the fact that he’s been so good for us and to us is really amazing. I think we would be a lot worse off without him.”

Off the Field Help

In helping to feel more comfortable in the aftermath of all the allegations and their reverberations, Kurtz said there have been a lot of meetings.

“[Nahas] is very good about reading a room,” Kurtz said.

“He knows if players are not ready to talk or not, so especially in those meetings, I think he’s been so good about stepping up, continuing to do press conferences is huge.” 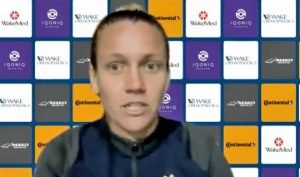 Meredith Speck, who had the only goal in the October 13, 2021 home match against the Washington Spirit agreed with Kurtz’s assessment of Nahas as head coach.

“I think Sean has been incredibly selfless,” Speck said.

“It’s a lot for him and I think he’s giving us so much space to feel comfortable and secure and everything. He’s putting a lot of that pressure on him.”

“I find he’s so respectful and understanding of what we need right now.”

But Speck said he has also been a great coach.

“We changed our game plan from the Houston game to tonight because he was like, ‘that didn’t work. We need to try something else.'”

Speck said the standards with the Courage are still super high, and there’s a multitude of trust in the interim head coach.

“Everyone feels really secure in everything that’s happening right now, and also very open to what they’re feeling,” Speck said.

Since becoming interim head coach, Nahas is 1-2. Picking up wins and 6 points in the final two matches would cement the Courage’s changes of post-season play, though both will be hard-fought matches. Portland Thorns FC currently sit in first place, the Courage in 6th, and NJ/NY Gotham FC are in 7th. The top 6 teams in the NWSL continue on to post-season play, with the top two teams getting first-round byes.