Jess McDonald celebrated her 31st birthday just over a week ago, but has celebrated accolades on and off of the pitch, but she’s not done — not even close. 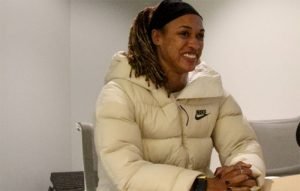 McDonald sat down with Courage Country a little over a week into February, fresh off of a tough morning weight workout, bundled up in her white Nike winter coat, with a poise, posture, and confidence unmatched in the NWSL.

McDonald’s distinctions just from last year amount to more than some players do in their whole careers. As a member of the Courage, she got to celebrate both the NWSL Shield and championship. She was also named the NWSL Championship MVP, after scoring a pair of goals in route to the 3-0 victory over Portland in Portland. She played in a total of 25 games throughout the 2018 season, scoring 10 goals and assisting eight times.

The forward also scored her first international goal with the U.S. Women’s National Team (USWNT) last year, scoring the only goal of the friendly against Portugal on November 8, 2018.

Just a little over two years ago, McDonald got her first USWNT call up on November 2, 2016 and subsequently made her debut on November 10 against Romania. Since then, she’s trained consistently, received multiple caps, and roster spots with the USWNT. McDonald said there are some definite differences between the training and play versus the Courage training and matches. She added that there is a comfort and familiarity that comes with playing with the Courage.

“I know the Courage players really well as players on the field,” she said.

“You name it, I wouldn’t even have to look, and I can play it in their direction and know they’ll be there.”

McDonald said she’s not as used to the pace and style of play with the national team.

“I’m still getting used to it a little bit,” she admitted.

She added there’s a little bit more pressure on the national stage, and it’s still a fresh new thing.

“It’s a fight every day, especially for me — this new player coming in, trying to scrap and fight for a spot.”

There’s also an added level of competition in the national camps, especially with the 2019 World Cup just mere months away.

“It’s a fight every day, especially for me — this new player coming in, trying to scrap and fight for a spot,” she said.

“It’s all or nothing sort of situation compared to a lot of the players that have been there for a while. They don’t have the worry that I have. I can easily get cut.”

The forward said she recognizes the opportunity at hand.

“This is my opportunity,” she said.

“I need to give it my all. This is all or nothing.”

As USWNT camp and matches conclude, the vast majority of players head back to teams in the NWSL, which means many teammates now become opponents. McDonald said it’s an interesting dynamic.

“It’s kind of funny because I’ll never forget my very first camp in November of 2016,” she said. 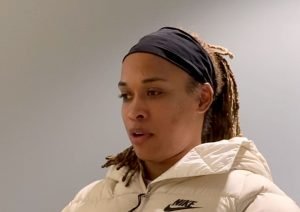 McDonald said she started a friendship with Kristen Edmonds who plays for the NWSL’s Orlando Pride, getting close as newbies in USWNT camp.

“We were these fresh women coming in and we stuck together,” she said.

Over the years, the two have gotten closer and closer. But it’s a different dynamic on the pitch.

“In one game — you know my long throw-in, [then Orlando coach] Tom Sermanni had her stand in front of me for my long throw in,” McDonald began.

“I was looking at her and I was like, dude, I don’t want to hit you. You’re my frenemy right now — because when I throw the ball in sometimes, the ball slips, or sometimes I miss throw it. I’ve never been hesitant to go against actually go against someone in a game. But going against my friends in the league is kind of funny at the end of the day.”

She added sometimes the friendships make the competitiveness rise that much more, but that moment against Edmonds is one she won’t forget anytime soon.

Through gritted teeth, McDonald said to Edmonds, “I don’t want to hit you. You need to move.”

Bouncing Around the NWSL and Landing In Her Second Home

With the draw of having national team players scattered around various NWSL teams and just the nature of the league, McDonald has played with six different NWSL teams: Chicago Red Stars, Seattle Reign FC, Portland Thorns, Houston Dash, Western New York Flash, and since 2017, and currently, the North Carolina Courage.

“It has its pros and cons,” McDonald said.

“Obviously being traded to six teams in the league got frustrating over time, but with the Courage, I’m back at my second home. It’s a comforting feeling.”

McDonald said that the bouncing around teams and cities also had its perks.

“It’s amazing at the same time because not everyone gets to travel,” McDonald said.

“For me to be able to do it for my job for something that I actually love doing every day, it’s a dream come true for a lot of people.”

Jess McDonald said she is at a point where she is taking advantage of it, and being happy, and appreciative of her opportunities and experiences. Traveling all over the world with soccer she said makes you that much more appreciative.

“A lot of things with traveling are very eye-opening,” she said.

She said it also is amazing to see and experience other cultures — even within the United States.

“Simply going to California — California is just a very different place than North Carolina,” she said.

“You can just totally tell the difference. To be able to experience those places and just seeing how they operate and seeing different things makes you appreciate this world more.”

More to Come From Jess

Stay tuned for part two with McDonald in the coming days.