Fresh back from playing in a pair of U.S. Women’s National Team games in Europe, Jess McDonald is at the Regional Transportation Alliance State of Mobility 2019. McDonald is accepting an award on behalf of the entire North Carolina Courage organization, and starring in a new RTA video. Who needs sleep? 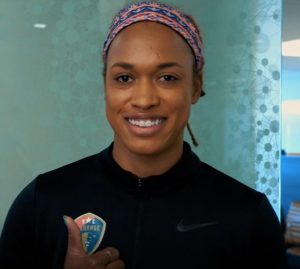 The award is yet another in the display case for the Courage, which already has the 2018 NWSL Shield and NWSL Championship.

The RTA describes itself on its website as, “The voice of the regional business community on transportation. RTA delivers business leadership to get our region moving faster. We leverage the strength of more than 100 leading member companies and 23 member chambers of commerce working in concert with regional partners to advance transportation solutions that grow our economy.”

The real star and entertainment out the RTA State of Mobility 2019 for Courage fans though comes from the new video the RTA produced. The nearly three minute video uses McDonald as the RTA’s #NoFinishLine coach and motivator, utilizing the indoor training facility the Courage and North Carolina Football Club make use of, the Athletic Lab, along with spots around the Triangle including 540 and the RDU Airport.

McDonald pushes the RTA team to push through challenges of transportation in and around the Triangle area.

Watch the latest video to feature an NC Courage player below:

In 2018, McDonald was named the MVP of the NWSL Championship after scoring a pair of goals in the championship game win against the Portland Thorns. She played in a total of 25 games throughout the season, scoring 10 goals, eight assists, and played a total of 1,865 minutes.

Happy to be at @RTATriangle’s State of Mobility 2019 and thankful to accept the RTA 2019 Regional Inspiration Award! pic.twitter.com/K1jKZc0eVS

In the News Jessica McDonald Video