Veteran striker Kristen Hamilton has seen her role change, grow, and flourish under NC Courage head coach Paul Riley — both at Western New York and now in central North Carolina. For the second time, Hamilton joined Courage Country as we sat down virtually Wednesday afternoon. As we approach the 2021 home opener, Hamilton is the sixth to answer the 2021 edition of Starting XI Questions.

Definitely facilities — just availability to facilities — where to train, what fields to be on, a gym to get into. Yeah, just being able to.

Definitely being able to spend more time at home. I was able to go back home to Colorado and I typically have only spent the past two years, weeks there. So for me to be able to go home in November and have a couple of months at home was really was probably the biggest silver lining for me.

How to embrace different roles — for me, it’s not if you’re not starting you’re not having fun. Anywhere where I think that was a big and it is a big thing for young players coming in being like, “Well I’m not playing. This sucks.”

But for me, it’s being able to embrace different roles — being able to find the joy in all of those, and just I guess look at the bright side of all those things.

Abby Erceg and Lynn Williams — Lynn for sure. We’re really close, so anything Abby doesn’t want to answer, I just go to Lynn and ask her or to vent. They’re very different personalities, so it’s good to get two different perspectives on things.

Lynn and I have a lot goofier relationship. We can kind of just joke about whatever. We’re so weird and just can be ourselves — just weird honestly. That’s probably the best way. We can just be weird together and laugh about stupid things. It’s very light-hearted and whatever.

But Abby is very introspective. She’s very thoughtful. She’s very blunt. She’s very honest about what she’s saying and what you get. So if you ask her a question and you don’t want to hear honesty, she’s not the person to go to. But if you want an honest answer and somebody who’s going to tell you straight up how it is, that’s the one person I would send you to.

I guess recently, soccer isn’t the end all be all is probably my biggest almost relief to feel that way. Sometimes because soccer can feel so stressful sometimes and it can weigh on you. It can weigh on your performance and it can affect how you feel on and off the field but I think just came to the realization that soccer isn’t everything. It’s not and it doesn’t define me and it’s not who I am. I am so much more than a sport, so I think that just knowing that and believing that was kind of a weight off your shoulders a little bit. There’s not so much pressure. There’s not so much whatever. It’s soccer. If I have a bad game. If soccer doesn’t work out, I’ll be okay. I’m fine. I’ve other passions of other things I like to do. 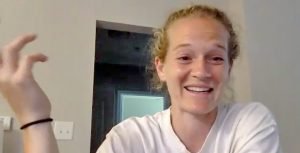 It’s hard because we’ve kind of had the same trainings for like four years. I’ll say when I first got to team, it was fitness and that was the biggest adjustment — how much we run and how much you’re expected to run and the effort that you’re excited to put in 20-7. You don’t just get to show up and play. I don’t know. It’s hard because now that’s so ingrained in us that I don’t know if there’s been a huge adjustment that had to be made this year.

I mean, everyone must give the generic answer — Mia Hamm, Tiffeny Milbrett. For me, though, there was one thing that I was playing younger. When I was younger, a dad on the opposite team came up to me, was like, “Hey, who are you? Tiffeny Milbrett?” and made some joke to me. At the time, I actually didn’t know who she was because I was so young. I went home and I researched who she was and I took that as such a compliment. I was like, “Wow. This is so cool. He just said that to me.” So that actually stuck with me.

A coffee machine — yeah the espresso machine. I go to sleep looking forward to my coffee in the morning. 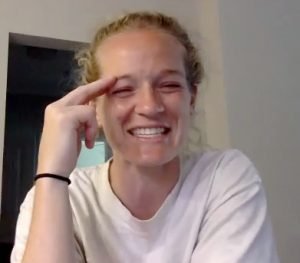 I can’t think of anything else. The only other sport I actually played growing up as lacrosse and it’s just not big enough. It was fun to play, but and honestly, women’s lacrosse was a little bit annoying that the rules are different.

Maybe not bingeing, but Lynn, me, Mace, and few of the other teammates have been watching Big Brother Australia, because Lynn’s boyfriend is on it.

So he’s on the show and there are three episodes every week. So they’re just constantly on, so we all have been watching that together. That would probably be the one thing I’ve been watching.

The weather’s been too nice for me to sit in front of the TV recently. I watch Jeopardy a lot. Sometimes I go back and watch. My family records all of the episodes so I can pull them up on my computer whenever. So it’s usually Jeopardy or Big Brother.

Question from Havana Solaun: I’m sure there’s a story behind this. She’s not just asking. Have you ever made up your own joke? 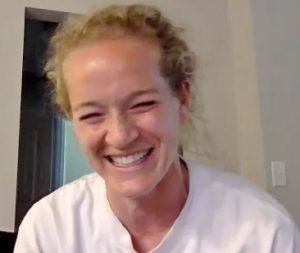 OK! I have. It’s inappropriate. I cannot repeat it on here. Lynn and I are sitting out on the patio. Lynn and I, we just wind each other up. We just keep going. It snowballs into like whatever else. By the end of it, I’m like, “How did we get here?” But yeah, we were just sitting out on the patio hanging out, and I was like, “Oh, I think I can come up with an original joke.” [laughs]

We’ll leave it at that. [laughs]

Look for more articles on Kristen Hamilton and the entire North Carolina Courage squad throughout the 2021 season here on Courage Country.