Before and during the 2020 NWSL Challenge Cup, head coach Paul Riley called out sophomore midfielder, Lauren Milliet by name, noting her hard work and increased output. It translated to more playing time a spark on the field. Courage Country sat down virtually last week with Milliet to answer our 2020 Starting XI Questions.

Oh man, I think if was not playing soccer in the NWSL I would either want to be a
travel journalist. I think that would be really cool. I’ve always wanted to tie travel into my work somehow or probably like some type of news reporter or sports reporter. I’ve wanted to do that for a really long time. I think it’d be hard to break into for sure, but I’d be really fun.

Travel, for sure travel. That’s the ultimate dream. But I do like my sleep — 8 to 10 hours is good for me. 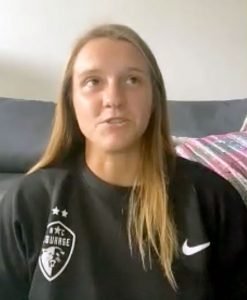 I know like when I was younger, I was always so intimidated to go talk to older players or someone that I look up to. So I would just encourage you. We’re all pretty friendly, so come and have a chat. 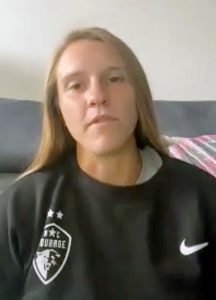 Random stuff, honestly. I think it’s like what we’re going to do for the picture as we’re coming out. Should I wave? It’s pretty much it’s just planning that. But yeah, other than that, I’m sure a lot of us are just focused on getting past the cameras and then after that, it’s like, OK. It’s go time.”

But I think it is it is a cool moment where you can be kind of silly and be yourself before it’s like you step on the white lines and it’s time to go. So I think that’s like a cool part about the tunnel.

Oh my God, there’s a million, but I would have to go with Deb just because she is a tricky little Deb. Every time, I’m like, “There’s no way she gets out of this.” She gets out of it. So yeah, I think Deb for sure.

Oh, man. That’s a hard question. I think just coming home and knowing that you’ve given everything to the game.

Definitely my dad. I wish he was there in person. I’m sure he’s trying everything to watch on whatever platform he can find. He’s been such a big supporter throughout my life and I remember when I was a kid, he would always be pointing different ways and being like, “Get up the field!”

So yeah, I think that just brings back so many good memories of youth clubs and stuff. He’s been such a good role model for me. So yeah, definitely my dad. 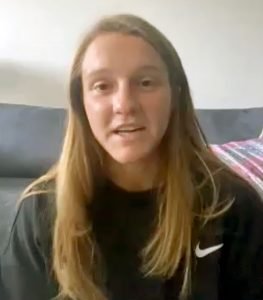 During, I do a lot of visualization where I just run highlight reels for myself and stuff that I do really well — just like running through stuff in my head. I think doing a couple of really deep big, deep breaths always seem to calm me down as well, right before I step on the pitch or in the locker and stuff like that, just to get my heart rate down a little bit.

Then after the game, I tend to call my family, just because I really like to go over the games, so I think that also calms me down. “Okay, what could I have done better here?”

I think when it’s fresh for me, it’s the easiest to lay it all out and be like, “Okay, now I can sleep,” if I do sleep. Normally after later games, I don’t sleep very much. But yeah, I think that’s something that I’ve always done since I was kid. 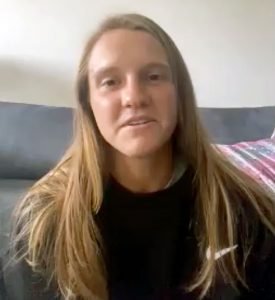 Oh man, I hope it’s like big time big time! But I think with big-time clubs such as these two expansion teams. I think the growth is exponential for women’s soccer. It’s only like starting here and I think it’s on the rise for sure. Hopefully, we have a big-time League where there are a lot more teams something similar to the MLS — just a lot of support from all different types of people. I think that’s a big thing too. You often get, “Oh, well, it’s women’s sports,” but I think that is something that maybe 10 years from now, it’s like, “OK, yeah but that’s women’s sports right? Play like a girl type of thing.”

So I hope that that continues to be a trend for sure. We ball too.

Question from Jess McDonald: What would you do if fear was not a factor and you could not fail? 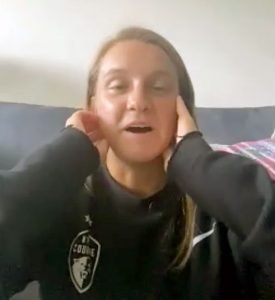 I would say jump out of a plane or something, but that seems cliché. I mean I feel like fear in a lot of ways doesn’t allow you to reach your potential, and I think for me if I can eliminate fear and a lot of that stuff, then hopefully I can see myself achieving every goal possible for me. As a kid, you set a goal, right, like you want to be an astronaut and there’s a lot of little things that get in the way along the way. I think a lot of times it is fear. If all that is eliminated then hopefully I can reach the goal I’ve always wanted.

Look for more articles on Lauren Milliet and the entire North Carolina Courage squad throughout the 2020 season here on Courage Country.