Skip to content
Home Hailie Mace Learn a Bit More About Hailie Mace
Hailie Mace started out with a bang, or assist as it were last season with the North Carolina Courage. The midfielder made her debut with the Courage during last year’s NWSL Challenge Cup. Debuting on the field as a 71st-minute substitution last June against the Portland Thorns, she quickly assisted on a Debinha goal. In the second year of the NWSL Challenge Cup, she’s had shots on goal and been an important part of both offense and defense.

Mace sat down with Courage Country during the 2021 preseason so that we all could learn a little bit more about the former UCLA, Melbourne City, and FC Rosengård player, now on the Courage roster.

NWSL, With a Quick Stop in Australia

Mace said her short time playing for Melbourne City in Australia was all about opportunity.

“The Australia stint that I had was more just a team needed an extra player,” Mace said.

“I really wanted to get some exposure overseas and I felt like it was the best time to do that, right out of college.”

But Mace said she always planned and wanted that to be a quick and temporary stop in her soccer career.

“I’ve always wanted to play in the States in this league,” Mace said.

She added it was important to her that her family got to see her play in person again.

“They didn’t get to watch me play at all when I was overseas,” Mace said.

“They love coming to the games and they’re really excited to do that, this year, hopefully.”

Paul Riley and the rest of the NC Courage coaching staff have a reputation for work hard every minute of every practice and match. While Mace said it was hard to compare her month-long stint down under to the Courage, she said the Courage were unique in their drive.

“Every job that we do is at such a high intensity, all the time and I don’t think that is necessarily the case in every country and every team,” she said.

Starting up in the uncertainty of the COVID-19 pandemic didn’t help things either, especially in learning and working through the Courage’s notoriously complex passing patterns, a series of pre-set order passing drills used as a warmup for both the mind and body.

“It was rough last year [when] we started,” Mace said.

“Then we had to take a break. Then we started again, and then I left, so I think now I’m still having to think a lot more than I ever would in anyone else’s passing patterns, but yeah I’m finally getting the hang of it.”

U20 and U23 National Team Experience

Mace has participated at the national team level for the United States as well, attending youth national team camps with both the under-20 and under-23 national teams, before getting her first senior team call-up and eventual cap in 2018. She said the biggest difference between her previous club and college experiences was the speed of practice and play and the next level in professionalism.

“Maybe, just like the speed of play getting used to that it’s different than like the College level speed of play, so I think that.

“Everyone who gets called into youth teams is super professional about everything they do on and off the field, and I think that’s helped me grow as a player,” Mace said.

In the 2018 CONCACAF Women’s Championship, the qualification tournament for the 2019 FIFA Women’s World Cup, Mace was the sole only college player named to the squad, where she started and played 90 minutes during the team’s 5–0 shutout against Panama on October 17, 2018. She said it didn’t add any additional pressure.

“I guess, I didn’t really think about it,” she said.

“I just wanted to do well and when I would get my chance, I just wanted to prove that I belonged there, but I didn’t really think much about age or where I was at in the soccer world,” Mace said.

Settling Into the Courage

As the Courage are about to have their second match of the 2021 Challenge Cup and its first on the road, Mace has settled into the Courage culture.

“I think it’s really cool to see that all the players, we hold each other to super-high standards,” Mace said.

“You can tell every practice is super high quality, because we have such high standards for each other. I think that it is really cool about this team and I don’t know if you can say that about a lot of teams. We all just expect a lot from each other every day, everyone has to show up and try their best.”

Courage on the Pitch 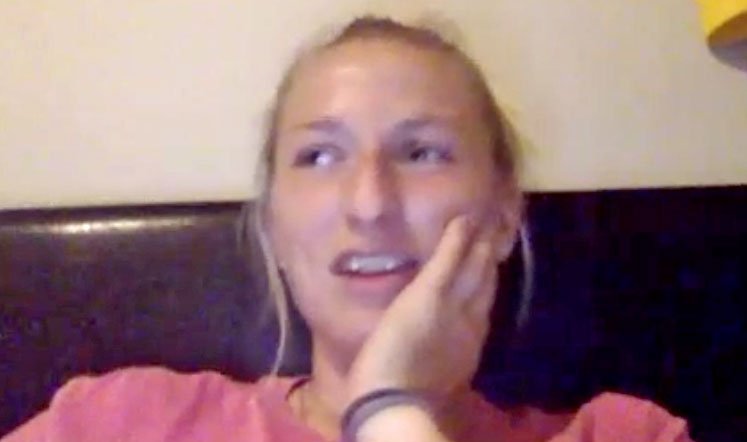 The Courage are on the road tonight at 6 pm ET in their second match of the 2021 NWSL Challenge Cup, facing NJ/NY Gotham FC at MSU Soccer Park at Pittser Field in Montclair, New Jersey. The match will be broadcast on Paramount+ in the United States.

Check out Mace’s Starting XI Questions from earlier this season.