Skip to content
Home Interviews Lynn Williams Reflects on 2018, Looks Toward Rest of 2019

The North Carolina Courage celebrated the treble in 2018, winning the NWSL Shield, the inaugural Women’s International Champions Cup, and ultimately the 2018 NWSL championship. Currently back on top of the table in the NWSL in 2019, Lynn Williams, boasting 4 goals in the past two games reflected earlier this season on 2018 and the remainder of 2019.

While the 2019 ICC hosted in Cary saw the Courage come up short to Lyon Feminines, 1-0, the Courage boast being the champions of the inaugural Women’s ICC last year in Miami, FL. Williams said it was a huge part of the year and season.

“I felt like last year we were unstoppable,” Williams said.

“We were clicking and gelling at the same time. Then when everybody left, we all felt that we were really good, but you don’t really know it until you put it to the test.”

Participating in the first two Women’s International Champions Cup meant the Courage got to play some of the best club teams in the world. 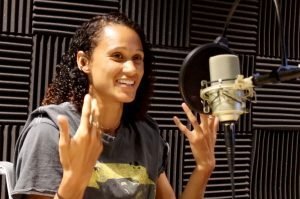 “We put in all this hard work. We don’t have the backup of our national team players. Can we do this? Are we as good as we think we are? I was just really proud of everyone stepping up. People who hadn’t even played a minute were getting on the field and just doing their thing and everyone else was trusting in the fact that we had been preparing right and trusting in somebody you hadn’t played next to all year long.”

Williams said the tournament helped both test them and prepare them for 2019.

“I feel like we really just supported each other and we came out with the win,” she said.

“I think it was just a cool experience that a lot of people haven’t gotten to play on the international level. I would say the next biggest event outside of winning the championship.”

The celebration for last year’s championship didn’t end with the hoisting of the trophy. With the NC Courage getting a new sponsor in Charles & Colvard for the 2019 season, their first act was honoring the 2018 championship team with championship rings.

“It’s sitting on my desk or my dresser in its little box, closed because I don’t want to ruin the little light,” Williams said.

“There’s a light in there that shines down on it at night. I think that’s the coolest part, but I don’t want to burn out my light. It looks awesome when I open it. I think it’s really cool to have the ring itself, but when I look at it, it just reminds me of the whole past year, all the hardship that we went through, how historic it really was and that team that came together. It just signifies the year. It’s not just exactly the material, but it is a sweet ring.” 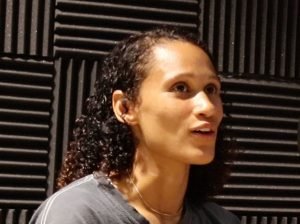 For the 2019 season, the Courage were fortunate to bring back most of its players and all of its coaches, save a few player trades, and the addition of three new players from the NWSL college draft. Williams said in a lot of ways, 2019 has been more building on the successes of 2018.

“If you don’t get on board, it’s very evident that you’re not on.”

With national team players being absent for the World Cup, World Cup training, and the subsequent Victory tour for the USWNT four, Williams said it added some extra challenges.

“It’s kind of weird — in and out, with the national team players,” she said.

Goals for the Remainder of the 2019 Season

While the NWSL Shield is an obvious goal, and the 2019 championship match happening in Cary, NC this year, both are obvious team goals. Williams said that for her individually, she wanted to continue to improve being more clinical on the ball, taking players on more, and not just relying on her raw speed.

“I think I always have that in my back pocket, but trying new things, getting out of my shell a bit more.” 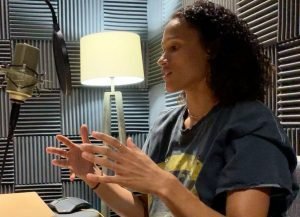 Williams said she feels when they have their traditional starting group in, it’s a slightly different approach with different opportunities.

“It’s a different style, not that I feel we get more opportunities, because there were a lot of opportunities, we just struggled to put the ball in the back of the net,” she said.

Williams said during the World Cup and player absences, she wanted to step up.

“I feel like I take more onto myself,” she said.

“How can you be that person that people want to go to? [When] we’re in the last minutes and we need a goal, we’re going to give it to you. I don’t know if anyone else feels that way, but I put that on myself.”

Williams has 4 goals in the last two games, for a total of 11 on the season, placing her into the second-place spot in the 2019 NWSL Golden Boot race behind Chicago Red Stars’ Sam Kerr who currently has 16 goals.

The Courage take on the Houston Dash tonight at home, with kickoff at 7:30. The game will also be broadcast on ESPNews.

Want to learn even more on Williams? Check out her answers to the 2019 Starting XI Questions here.