Courage Country sat down virtually with McKenzie Meehan as the first player we’ve had in back-to-back years to answer our Starting XI Questions.

I don’t know because — well there’s no because — I don’t know exactly what I want to do, but I think I would like to work within the business world.

I know that’s vague, but finance or consulting — something within that.

If I wouldn’t get tired, I guess I would just enjoy the outdoors more, if it was light outside. I would say travel, but you can’t really travel overnight and then get back.

They should definitely come up and say hello. I’d love to talk to them or get a picture.

I think I would say I want to continue to focus on my finishing, and taking advantage of the opportunities I have. 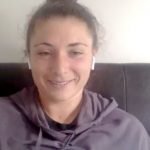 It varies. Sometimes it’s just light and fun if you want to just calm your nerves and be ready to go. Then other times, it’s just last-minute tactical adjustments, making sure if their lineup is any different, that we have the right assignments on corner kicks or things like that.

We have so many great players that I could give so many different answers, but I guess I would say Sam Mewis. The two of us played together when we were younger, so it’s kind of fun to be on the same team so many years later.

The best part about competing is just the unpredictably of it and being able to go out there and just hold yourself to a really high standard and expect the best out of yourself, and be able to showcase your ability, but also test yourself at the highest level.

I would just say, my family. I know they’re always watching, but I wish they could be here all the time. Obviously, they’re far away. 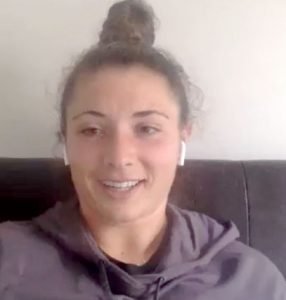 Leading up to a game, I like to just think about a few different things that I can do during the game and focus on. I think about it and picture it so that when it comes, I’m confident and I know that I have the ability to do those things.

Sometimes it’s tough to wind down after a game because you have so much adrenaline going. Whether I played well or badly, I just try to keep that in perspective and remember it’s just a game. If we lost, I think about what to improve next time, but kind of just move on from that. If we win, obviously, that’s super exciting, but the same thing. It’s one game. It’s part of the process, so just remembering that.

I hope that it just continues to evolve and grow. I know there’s interest in expansion teams, and it’d be great if we could get some more teams to give more people more opportunity.

People definitely want to support women and support this league. So I hope that especially with the hiring of Lisa Baird, the new commissioner, the league can continue to grow and be twice the size within the next 10 years.

What are you most looking forward to about the NWSL Challenge Cup?

First, it’s just the competition and being able to test ourselves against other teams. Second is just being able to spend a month with the team in a tournament style. It’s going to present a lot of challenges, but just be a lot of fun and be able to work together and have a lot of great memories.

Like the Courage, were just starting our 2020 campaign midway through the year. Check out our first two 2020 Starting XI Questions: