The North Carolina Courage signed all five of their 2022 draftees to contracts for the 2022 NWSL season, adding a forward, two midfielders, a defender, and a goalkeeper to the 2022 Courage roster.

The five new players are midfielder Emily Gray, forward Diana Ordoñez, defender Kaitlin Fregulia, midfielder Haleigh Stackpole, and goalkeeper Marisa Bova — all of which have been active participants in the first two weeks of Courage practices for the 2022 season. 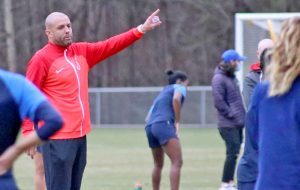 “All of these players were on our draft board, and to now have them signed is fantastic,” Nahas said.

”They are eager to learn and build on their already well-established knowledge of the game. The players have taken to them and they have come in and established themselves right away. We look forward to what the future holds for these young, talented players and where each day of training and being in our environment takes them.”

Below are a little about each player, and quotes taken primarily from the NC Courage press release published today, announcing the signing of their entire draft class.

Gray, a midfielder from Virginia Tech, was selected third overall by the Courage. In her senior year the Sewell, NJ native was one of three players to appear in each of Virginia Tech’s 17 matches, leading the team with 26 points, nine goals, and eight assists. She also broke the single-game school record for assists with four and was subsequently named to the All-ACC Third Team, the United Soccer Coaches Association All-Atlantic Region Second Team, and the All-ACC Academic Team.

“Signing my first professional contract is a dream come true and I would like to thank the NC Courage organization for this opportunity to begin my career,” Gray said. “The environment so far has been fantastic and I hope to grow into my own within this talented team as we look to compete for a championship. This is just the first step and I’m looking forward to the start of the season.”

Also a first-round selection, Ordoñez was drafted by the Courage sixth overall. A forward from the University of Virginia, Ordoñez scored 45 goals, 15 of those being game-winners, and tallied 102 points while with the Cavaliers. In her freshman and junior year, Ordoñez led the ACC in goals. Indicative of her talents, the forward was named a 2021 MAC Hermann Trophy semifinalist, a 2021 All-American by United Soccer Coaches, and was thrice named to the ACC Championship All-Tournament Team.

“I am so grateful to have the opportunity to sign with the Courage,” Ordoñez said.

“I’m incredibly excited to be starting my pro career and I couldn’t have asked for a better place to be.”

As the Courage’s third pick, centerback Kaitlin Fregulia was selected as the 12th overall pick in the 2022 NWSL College Draft. Fregulia is a Torrance, CA native who played college ball at Long Beach State University and was the team captain her senior year, with appearances in all 18 regular-season games. Fregulia was named the 2021 Big West Co-Defensive Player of the Year and was on the 2021 Big West All-Conference First Team and on the United Soccer Coaches All-West Region Second Team.

“I’m so excited to be a part of the Courage and take my soccer career to the next level with this club,” Fregulia said.

“I have been dreaming of being a pro since I was a little girl, so this moment is super surreal to me. I’m excited to bring a hard-working mentality and willingness to learn and grow to the team.”

The Courage selected midfielder Haleigh Stackpole as their 29th pick in the second round of the NWSL 2022 College Draft. Haleigh played in college at the University of Mississippi and is a local, playing in the NC Courage Academy system. In her senior year at Ol Miss, Stackpole earned Second Team All-SEC honors and started all 21 matches. scoring five goals and ranking third in the nation with 16 assists on the season. She was also named to the 2021 United Soccer Coaches All-Southeast Region Second Team.

“… now that I am here I insist on being the best I can possibly be day in and day out,” said Stackpole.

“I’m excited to play for a winning team and learn from and play with some of the best players in the league. I’m super excited to be coached by Sean and the staff and gain knowledge on how to compete at the top level. I hope to bring an elite mentality and contagious energy that breeds success and assist in creating an environment that pursues excellence.”

The Courage selected Hartland, WI native Marisa Bova as their last pick in the 2022 NWSL College Draft. Bova is a former Big Ten goalkeeper from Purdue University. She set several Purdue University records, including becoming the first goalkeeper with 100+ saves in a single season. Bova was also the Boilermakers’ captain in 2021, making 113 saves in her final year at the University.

Bova averaged .91 goals against and a .807 career save percentage at Purdue, with 21 total shutouts in her four seasons. The former Purdue keeper was also named to the All-Big Ten Second Team and the Academic All-Big Ten.

Bova said she was beyond grateful to sign with North Carolina.

“The environment here is special, and I look forward to learning and growing each day.”

The semi-finals will occur on Wednesday, May 4th, with the 2022 NWSL Challenge Cup championship happening Sunday, May 7th.