With the 2019 World Cup and the United States’ victory in the rearview mirror, the 23 players of the United States Women’s National team have now landed back at their club teams. For four, that means returning to the North Carolina Courage who are at the top of standings. In a press conference held at WakeMed Soccer Park in Cary, North Carolina, the four talked about building momentum for their club in the NWSL.

Those four NC Courage players include forward Crystal Dunn (who played as a back for the USWNT this season), midfielder Sam Mewis, defender Abby Dahlkemper, and forward Jessica McDonald. All earned playing time throughout the 2019 FIFA Women’s World Cup.

Dahlkemper and Dunn earned consistent starts throughout the World Cup — 7 and 6 caps respectively. with Mewis also getting significant time, with 5 starts over the 7 games in the World Cup. including the go-ahead assist in the final, feeding the ball to Rose Lavelle. McDonald played in one game in the World Cup but boasts 2 goals in 8 appears over her USWNT career. Mewis has 56 appearances, with 14 goals and 5 assists. Dahlkemper has 47 appearances, and a trio of assists. Dunn, who was overlooked in the last World Cup, has the most international appearances with 91, along with 24 goals, and 16 assists in international play.

Investing in the NWSL

Riding the wave of success and exposure of the 2019 World Cup, the NWSL has a big opportunity and responsibility for the remainder of the 2019 season and beyond. A total of 58 players were named to the rosters for 11 countries at the World Cup. New changes already have potential with Budweiser signing on as a league sponsor, and ESPN inking a deal to broadcast the games. Other changes, investors, and sponsors are likely around the corner. 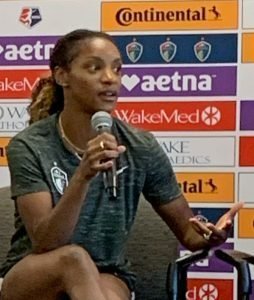 “When we talk about money pouring into the league, obviously [it’s] salaries — players getting paid even more,” Dunn said.

“I think there are just so many ways that money can be beneficial. It’s not just money in pockets. It’s facilities. It’s gear. It’s just anything that makes you feel like a true professional.”

Dunn said a lot of people just say that more money is needed, but it’s the effect the dollars can have on the sport, the perception, and level of professionalism.

“For me to be at my best, I need to come into a facility that makes my standards rise even higher as a professional athlete,” she said.

“The list can go on. Every little bit matters.” 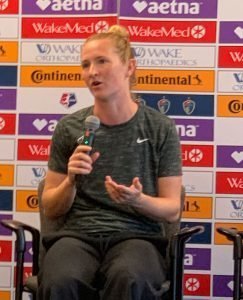 Midfielder Sam Mewis said the television deal and raising the minimum salary are both crucial. She said creating a professional atmosphere is also key.

“I think we do a great job here at the Courage and the league, in general, can continue to push those things forward in the league front office,” Mewis said.

She said there is a lot of gratitude with the NWSL in its seventh season, but things need to continue to get bigger and better.

“We want this to get better. We want this to grow. I think there’s a lot of work going on behind the scenes with both the NWSL and the national team players associations to push those things along.” 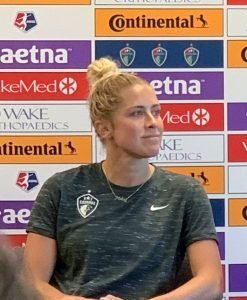 Defender Abby Dahlkemper agreed with her teammates on pushing for progress and said closing the gap in between the top and bottom of the NWSL standings.

“I think the biggest thing for me, is just making sure that all the girls that play professional soccer feel like this is their sole job and that their salaries are something that they can be sustained and can live off of.”

She said stability and security of the league are also essential, partially by creating fans that are not only invested in the World Cup four-year cycle. 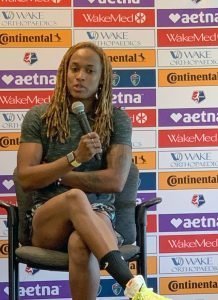 Arizona native, Jessica McDonald said marketing is one of the things she’d like to see taken to the next level.

“As you all probably know, I’ve played in a lot of teams in this league,” she said.

In the various cities McDonald played in, she said so many people don’t even know they have a professional women’s soccer team.

“I just made a post yesterday about my first day being back with these girls with the Courage and someone literally messaged me saying they lived 30 minutes away from here and didn’t even know they had a women’s team here,” McDonald said.

“So I think if we can market a little bit better because I’ve heard that one too many times.”

The Courage also currently have three other International players on their roster — Debinha (Brazil), Stephanie Labbé (Canada), and Courage captain, Abby Erceg (New Zealand). All three had previously returned to North Carolina following the World, and have trained and played since returning.