We are all continuing to experience crazy times as many are working from home, social distancing, and missing their normal activities and routines. Sports have been shut down, and it’s had a toll on the employees of those organizations. Like many businesses, with decreased or no revenue coming in, layoffs and furloughs have been inevitable. A little over a week ago, 60% of the North Carolina FC staff was furloughed as both the North Carolina FC and NC Courage season have been put on extended hold.

Ryan Jernigan, founder of the Oak City Supporters (OCS), and organizer of the GoFundMe fundraiser said soon after getting a text about the furloughs, and getting on a Zoom call the Dead Whales Society knew they wanted to do something to help people out.

“It was just kind of not if we were going to help as a group, or try to help in some way, but how was the best way?” Jernigan said.

Jernigan said they had a couple of conversations among the Oak City Supporters leadership, but also Uproar and then Red Eye Rowdies, and they landed on using the GoFundMe platform.

“GoFundMe just made the most sense,” he said.

“It’s got one of the better infrastructures of places you can give.”

Eboni Christmas, a founding member of OCS, as well as part of the leadership for both OCS and Dead Whales, said it was a no-brainer to help out.

“I have friends in their front office that have been with them for a long time, 3-5 years so, anything that I could do to help them with whatever they needed,” Christmas said.

“We hit that pretty quickly in a few days, and since then it’s kind of slowed pretty dramatically,” Jernigan said.

“So we set a new goal at $2,500 that we’re hoping to hit in the next few days. The thing is, there are I think 17 staff that were furloughed. $2,500 doesn’t go very far. Some of them have reached out to me and said, ‘you know what, I’m ok. My spouse is still doing well,’ or I think with the unemployment plus the government subsidy right now, they’re going to be fine. But some of them aren’t. People and their spouses have been laid off or furloughed at different jobs, and so I think what I’ve kind of left it up to the NCFC and Courage staff to figure it out, but really is it a small amount for a lot of people, or do we need to put most of it towards those who are more in need?”

Jernigan said so many of the North Carolina FC employees do it for the love of the game and the team.

“A lot of them don’t have glamorous jobs or very well-paying jobs, but they just love the sport, and they love what they’re a part of.” 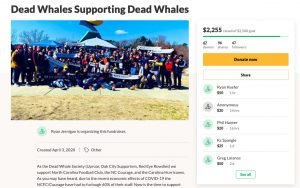 After initially looking to just assist furloughed employees, the supporter group members decided to reach out to its own roster and see if there were others in need.

“We said at first let’s try to support the furloughed employees, and then we said let’s reach out to our members to see if they have needs,” Jernigan said.

Christmas said they’re still raising money, and will continue to do so for both staff and Dead Whale Society members.

“We just wanted to make sure we had that capability to do that and it looks like we do, especially with the 2K coming in, within three days,” Christmas said.

Contributing to the GoFundMe

Jernigan said he acknowledges the situation the soccer club is in.

“I understand why the club had to do it — I do get it,” Jernigan said.

“It’s lower-division soccer on the men’s side, and women’s soccer, you don’t have that MLS soccer club attachment, you’re fighting season to season, sometimes game to game in certain situations. So we’re just trying to do something, even if it’s little to try to help.”

Christmas added it was important to assist in some way.

“We just want to make sure that we can touch everybody, whether it be a little bit or a lot that needs help, that we can do that,” Christmas said.

“Some are able to still fully do their jobs remotely and get paid for it,” he said.

“If you’re in that category, consider giving back to one of our local professional club’s staff and its supporters,” Jernigan.