Skip to content
Home Interviews Courage Head Coach Paul Riley Critical of NWSL 2021 Schedule
The North Carolina Courage face the Orlando Pride Saturday night for the fourth time in 2021. It’s the third regular-season meeting for the Pride and Courage. The two played in the 2021 Challenge Cup as well back on May 1, 2021. The two teams will not face off again in 2021 unless they happen to both meet in the post-season. Scheduling and decision-making by the NWSL were points of contention for North Carolina Courage head Coach Paul Riley when asked in today’s press conference. 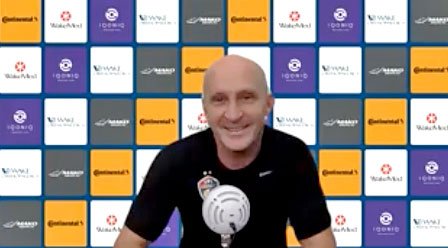 “All I know is we play mostly local teams in the third game,” Riley said.

“Mostly, the far teams, we’re not playing — for instance, Portland comes here twice. We go there once.”

After this weekend’s match against Orlando, the Courage won’t play two NWSL teams, unless they meet in the postseason — the Orlando Pride and OL Reign. The Courage played Orlando in Cary, NC on May 22, 2021, losing 2-1, and then again on July 4th in Orlando, beating the Pride 2-0. The Courage drew and won (2-1) in their pair of meetings with the Tacoma-based OL Reign.

“I don’t look at the whole schedule, but it’s certainly unbalanced. That can have its effect at the end of the season, you know?”

No Break for Olympics

Riley was more perturbed with league barreling through regular season NWSL matches while so many teams were absent players due to Olympic duties.

“There are some teams that have had a week off with their Olympic players being away,” Riley said,

Riley said he didn’t understand and doesn’t know how it happened either that only some teams would be given a bye during the Olympic days.

“The league should have taken two weeks off in all fairness,” Riley said.

Riley said to look at other leagues with Olympic athletes.

Riley pointed out all the matches being played during the Olympics count just as much as those before those matches down the stretch.

“A two-week break would have hurt nobody,” Riley said.

“I don’t understand it. Don’t get me started on that one.”

The Courage (5-4-2) face the Orlando Pride (4-4-4) for the third and final meeting of the regular season Saturday, July 31, 2021, at 7:00 pm ET at Sahlen’s Stadium in Cary, NC. The match will be broadcast on Paramount+ in the United States, and Twitch around the world.

Jessica McDonald and Ryan Williams will still be unavailable due to the NWSL’s COVID-19 protocols. Abby Erceg will be back, but Riley said it’s unlikely she would start.