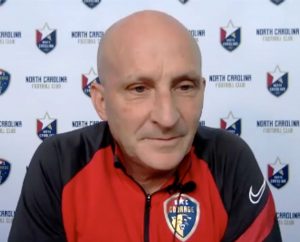 With two games under their belts, the North Carolina Courage are set to take on the Chicago Red Stars in their third match in the preliminary stage of the 2020 NWSL Challenge Cup. Head coach Paul Riley said their practice intensity is one of the crucial keys to continued success in the tournament.

While head coach, Paul Riley said that fitness and endurance play a role, the real differentiator for the North Carolina Courage is the fact that they maintain intensity in every practice. 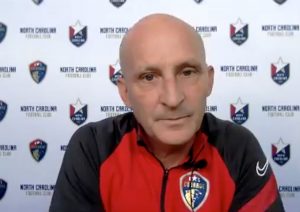 On Wednesday, July 1, the North Carolina Courage defeated the Washington Spirit 2-0 achieving their second win of the NWSL Challenge Cup first round. With a total of six points for the pair of wins, the Courage are now in first place in the tournament.

Riley said keeping the intensity dialed up was paramount to winning the match.

The Courage’s coach noted that even though the scoreboard ended at 2-0, the team looked secure.

“We bided our time. We probed a little bit more than we probably normally would a couple years ago,” Riley said. 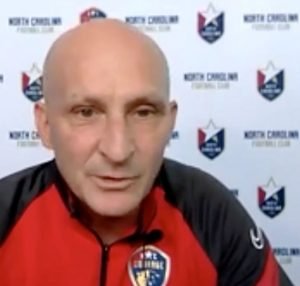 Riley added that the 2020 Washington Spirit squad are a great young team.

“I think it was a good experience for them the other day,” Riley said.

“I think they needed that. It was a good experience for us too the other day. They played some great football out of the back. We were intent on making sure that they stayed in their half of the field, which we managed to do for the majority of the game, which I think is a credit to the players and a work rate. If you let Rose [Lavella] get going, and let some of those players get going, you’re in big trouble. We were able to compact them.” 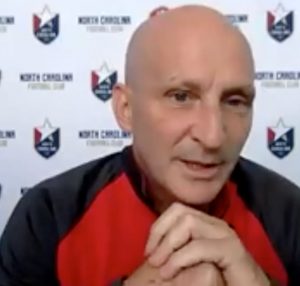 Since its inception, the Courage and the coach leading them have been synonymous with high-level of fitness and endurance, but Riley said that’s not where success for the team is found.

“It’s not so much the fitness, I think it’s the intensity at practice and the competitiveness of practice,” Riley said.

“I mean even this morning, the day before a game, it’s gotta be competitive for me. It’s gotta be intense. It can’t just be, ‘Oh we’ve got a game tomorrow. Let’s just knock a ball around and play soccer tennis.’ It’s not just the way we are. It’s important that everybody’s at their best.”

The Courage face the Chicago Red Stars tomorrow, July 5, in their third match of the preliminary stage of the tournament. Their last meeting against the Red Stars was in the 2019 NWSL Championship ending with the Courage on top 4-0.

Tomorrow’s match in Utah kicks off at 12:30 p.m. EST, broadcast on CBS All Access and Twitch outside of North America.