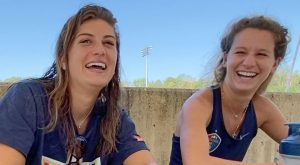 In a first, Courage Country sat down last week with a pair of North Carolina Courage‘s players in a simultaneous interview. What better pair to interview together than the dynamic duo of fun-loving roommates, Cari Roccaro and Ryan Williams. Fresh off of a morning training session, they concluded their interview by answering the Starting XI Questions.

Read the pair’s hilarious answers below. 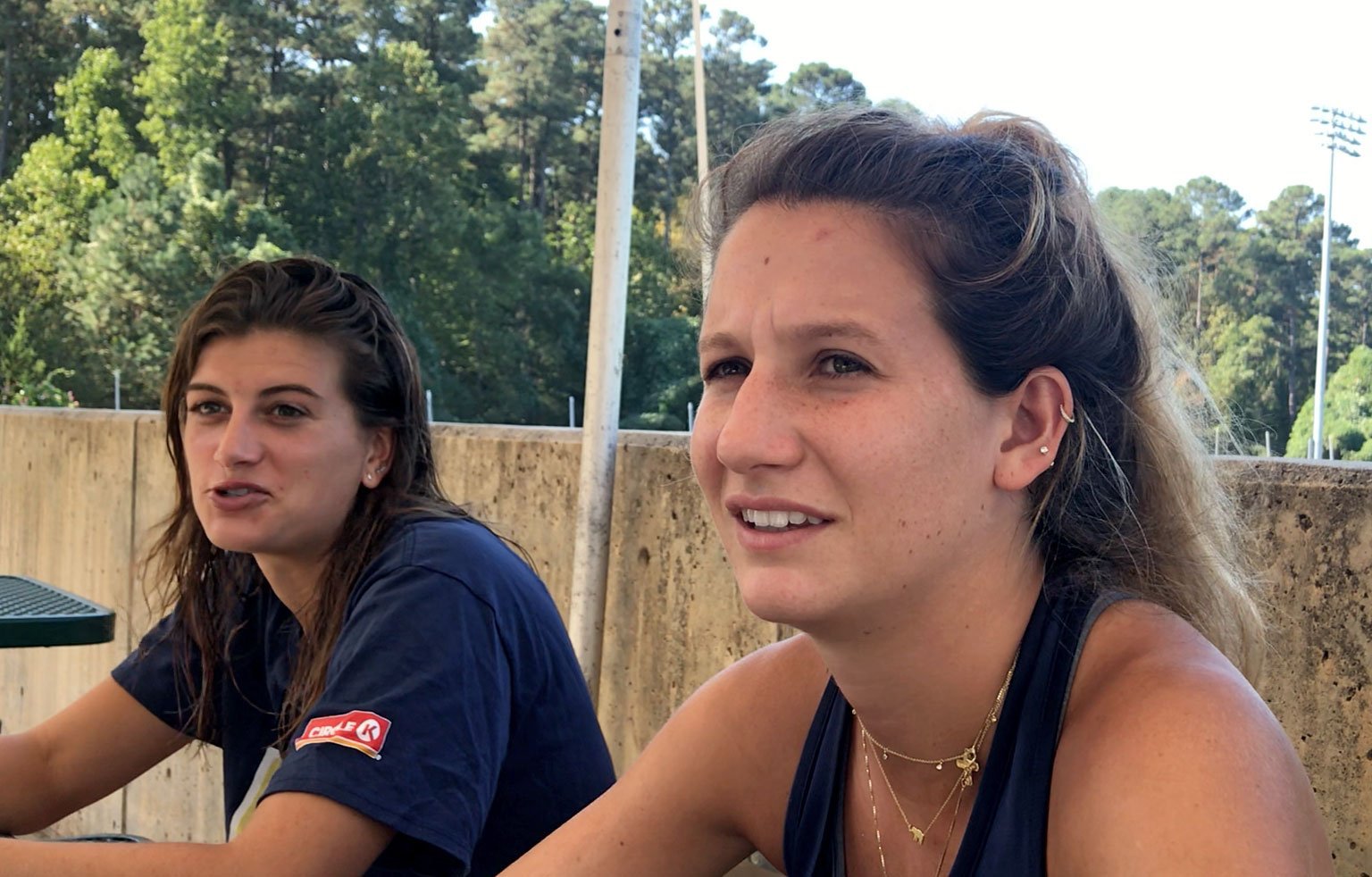 Ryan: Oh gosh. I try not to be superstitious.

Cari. I don’t have anything. I just like to dance. I guess we sing our, “to the window, to the wall,” but I add in my own twist to it. If I don’t sing it, I think everyone is kind of like, “come on.” I always sing my little part. What’s that song called? I have to know. Get Low. 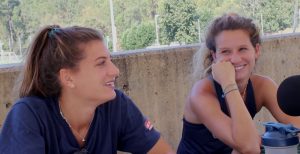 Cari: Fifteen minutes a day outside in the backyard. It’ll add up for sure. That’s it.

Ryan: Use both feet too.

Cari: Good one. My biggest thing/compliment someone can give me is when they ask, “Are you a leftie or rightie?” And I say, “Thank you!” That means you practice with both feet, and they can’t even tell. That’s a good one — both feet. 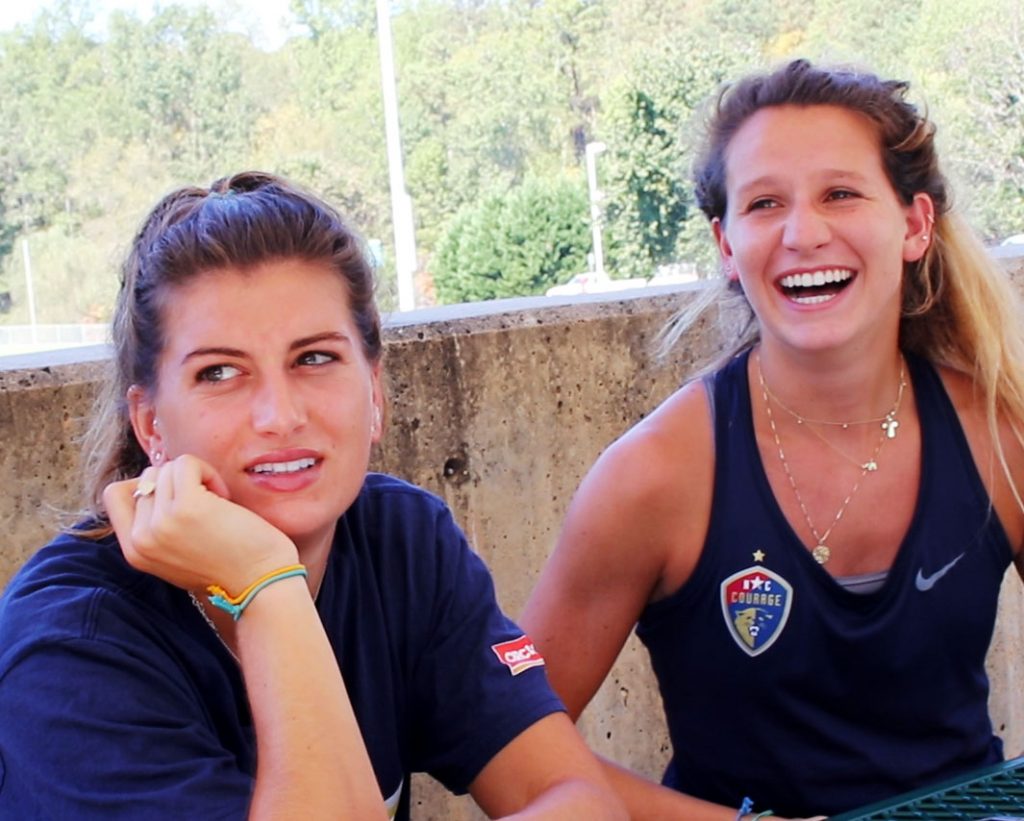 Cari: Our obsession with each other maybe. It’s kind of cheesy, but I feel like some people are sometimes like, “You are just so whatever now all the time.” I’m very light-hearted and positive, and people have come up to me and have asked,” How does running not make you anxious or how are you so chipper?”

Ryan: I don’t know what people don’t understand about me. Do you know?

Ryan: That is a hard question. I’ve never been asked that before. I’m not sure. My mind is actually blank.

Cari: Sometimes I don’t understand how when Paul explains the drill, you go the other way and then go, “What?!”

Ryan: I am not the only one! He’ll be behind the yellow man, and he’s over here, and I’m over here, so behind is different for me. He did it to me two days ago.

Cari: Not to make you feel sad, but everyone else standing with me was like, “Is she serious?” Maybe people have trouble understanding how Ryan can’t understand. There you go. I helped you out.

Ryan: Sometimes, it just takes a second. I’m a visual learner. If he could show me. 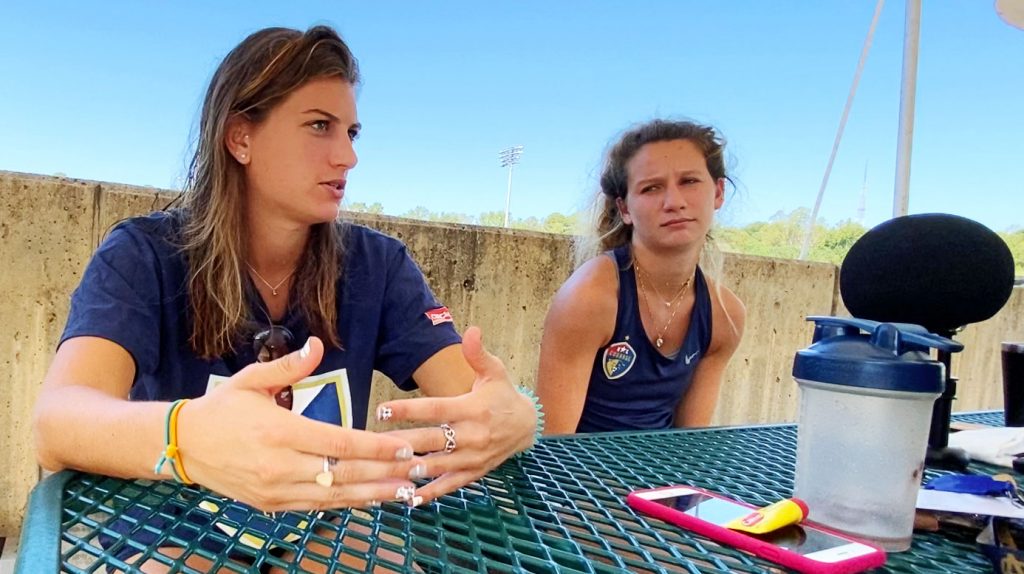 Cari: If someone comments on my work ethic and my attitude — the intangibles — the things like you know that can’t be coached. I’m very proud of that. Off the field, I guess it’s just being a good person. If someone says, “Yeah, she’s great to be around.” That’s good enough for me.

Ryan: I think on the field, hard work for sure. If someone says, “you just didn’t stop today. You worked so hard. You were everywhere.” Off the field, I guess the same thing, just good energy, good vibes, and fun to be around. 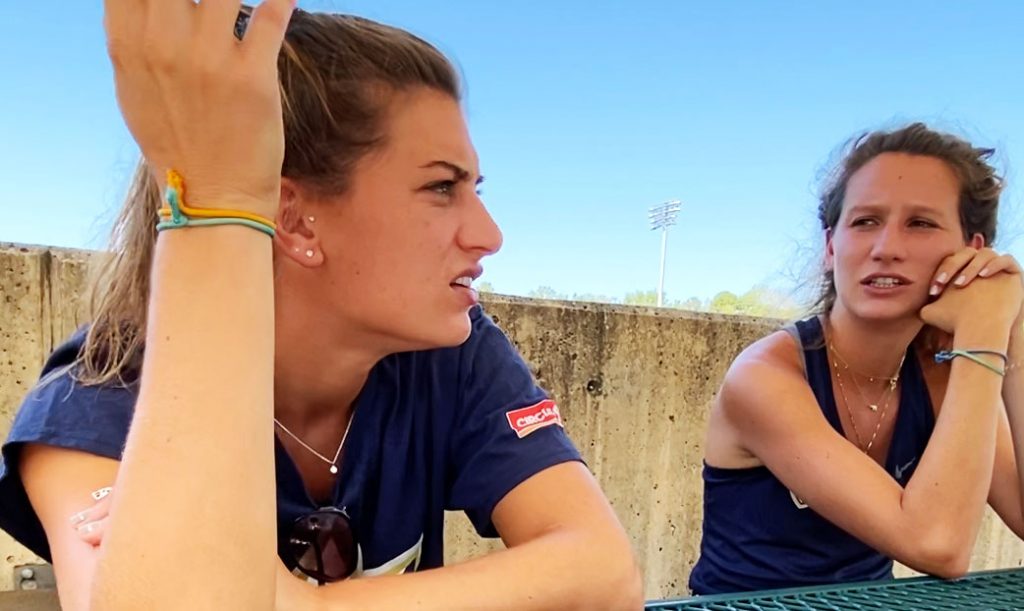 Cari: Sit on the stools by the kitchen table.

Ryan: Yeah, we always sit on those stools.

Cari: We sit on the stools, and figure out our next moves.

Ryan: You usually say, “The night is young.”

Ryan: Then we take two hours to figure out what movie we want to watch. That’s pretty much how it goes.

Cari: I mean I feel like people have always just told me to believe in myself, which is so cheesy and cliché, but it’s true. I mean I feel like so much of your success is mental, and if you’re confident and believe in yourself, and want to put in the work, and think you can do it, for sure.

Ryan: My dad said recently to not be so hard on yourself. I think that it’s really easy to be hard on yourself when you want to be successful, but I would never say some of the things. If I couldn’t say it to someone else, then I shouldn’t say it to myself. So I think it’s just not being so hard on myself, and knowing that I’m not going to be perfect in whatever I do. It’s about working hard, learning from my mistakes, and having fun.

Also, my parents again have told me that you’re there for a reason. That goes along with the confidence thing.

Cari: [Points toward the Courage locker room, just as head coach, Paul Riley emerges, as if on cue] That man right there. I must have known he was coming out. He found me when I was young, saw me play, brought me to his club, and was relentless in his pursuit. He found me again when I was down in the dumps, brought me back. I’ve had a lot of these where Paul brings me back. It’s happened several times in my life over the past 10-11 years. 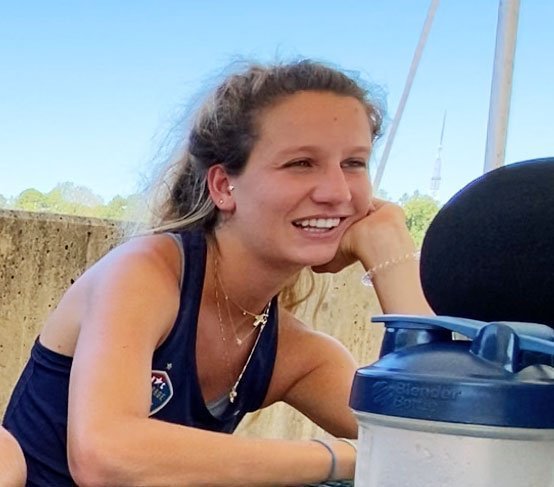 Ryan: For me probably, it’s my assistant coach in college, Ryan Higgenbotham. We just had a really good relationship when I was at TCU. Whenever I’d ask to do extra, he would be out there, hitting long balls with me, or working on crossing, or just doing individual training. Whenever I would ask, he was there. He was always really honest with me in what I needed to do and really always believed in me and wanted me to do well, and do so successfully. He’s also just a good person. He cared as me first as a person, and then as a player. 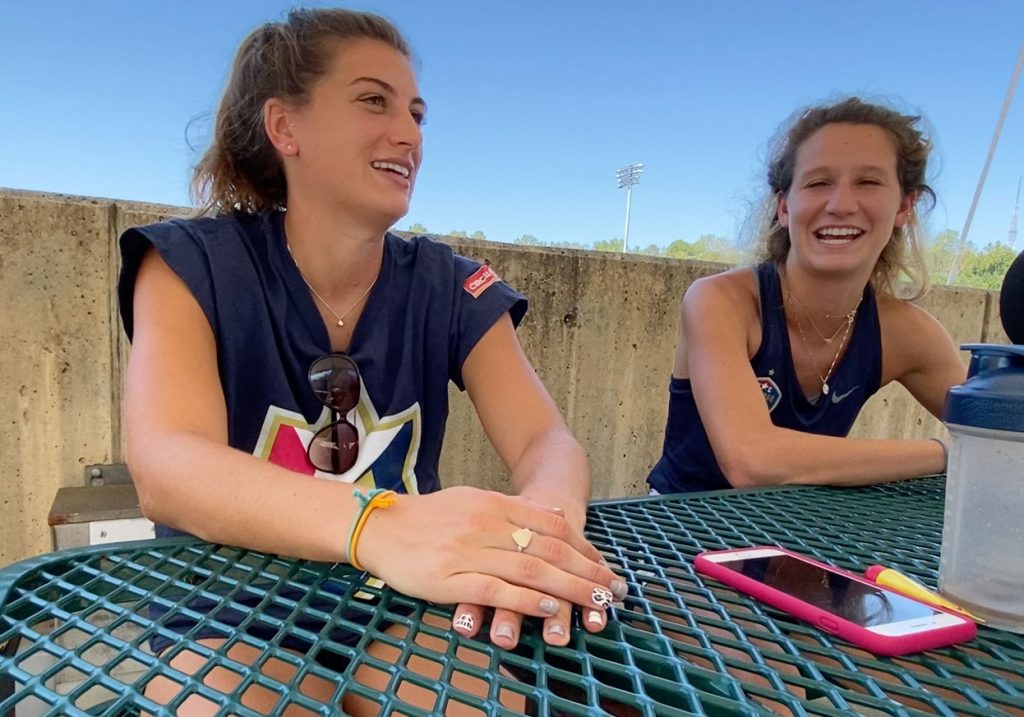 Cari: For me, it’s that I’m always going to be a goofy, dopey, dufus. I’m going to laugh, no matter what environment I’m in. That’s not necessarily something that has to do with the team, but that’s what I would bring to the team, but that’s something that I think whatever team I go on, I make sure that’s something that is there because it makes it way more fun. Every team for me is very different — the style of play, the personnel, all that type of stuff, but laughs always — 100% there for me always.

Ryan: I feel like every team is so different. Even every year is so different. The team this year is not the same as the team last year. Every year in college, the team was different because of new people coming in, people going out. It was never the same. So I think that for me, what I want to bring to the team, is I’m going to work my very hardest every day. But I do want to get better every day — improve every day, and be better than the day before.

Cari: Well, McCall just texted me. But it was Lynn besides that because Lynn is letting me be on her Spotify account. I’m so excited because I think everyone’s sick of the Pandora commercials when I play on the [locker room] speaker.

Ryan: Honestly, you could have asked me.

Cari: But you never offered. You knew I was struggling with this Spotify situation for eight months. Lynn comes right up to me and says, “Would you like to be on my Spotify account?” I said, “Sure.”

Ryan: Oh OK. Well, you could have asked. The last person I texted was her [Cari]. It was not about Spotify.

Cari: What was it about? I don’t even want to know, man. Let’s see.

Ryan: Oh, she sent me this picture of us in the sunflower fields. The live video is really funny. We were trying to get each other to laugh, so we were punching each other in the stomach.

Cari: So dumb. It was really funny. 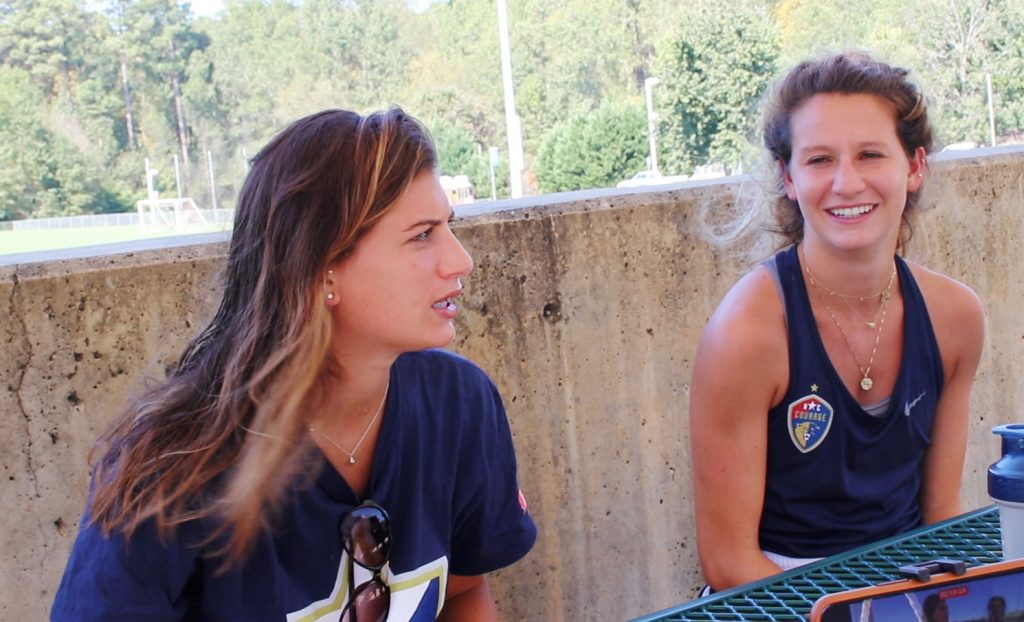 Ryan: That’s what I was going to say. Treats. Chocolate.

Cari: Bachelor TV with chocolate. Put them together.

Ryan: I have such a weakness for chips. If I get a bag of chips, I will eat them in the same day that I get them. I also love cheese.

Cari: I was going to say cheese for you too. That’s why I leave the house now when you’re sitting on the couch. It’s only a matter of time before she breaks out her snacks. I can’t do it today.

Ryan: I’m a snacker for sure.

Have you made a trip to Wegman’s yet? 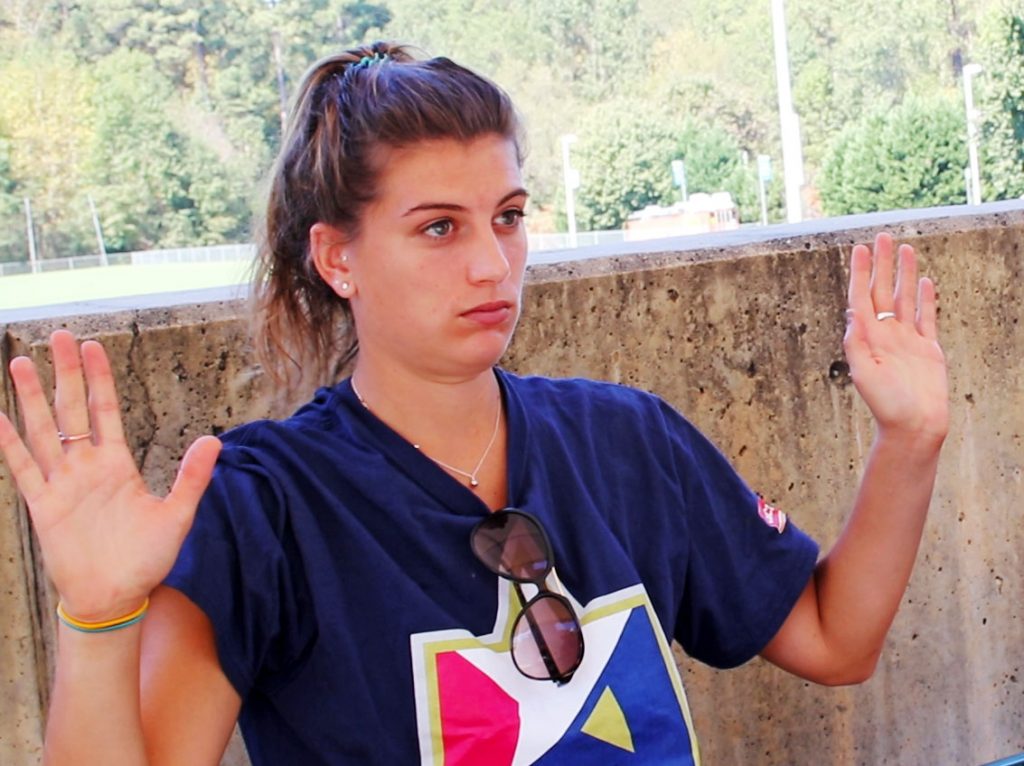 Ryan: I was loading up the cart, and she got garbanzo beans.

Cari: She got all this shite.

Ryan: I didn’t get unhealthy food.

Cari: Yeah, we got plant-based cookie dough, cause we needed a treat.

Ryan: It was trash. I’d rather have the real stuff.

Cari: Worth the trip.

Cari: She was like, “This tastes like rabbit food.” But they have all the normal good stuff.

Ryan: We actually got sushi for lunch. It was really good, and I don’t really usually like sushi.

Cari: We split them.

Ryan: Worth the trip — shout out Wegmans.

Cari: Spending time with friends, being outside, not really having a worry in the world.

Ryan: When I go home, family, my dogs. The little things.

Bonus #12 question from Denise O’Sullivan: Will you and Ryan start a Vlog together, and what would you name it — to show everyone what they’re about? 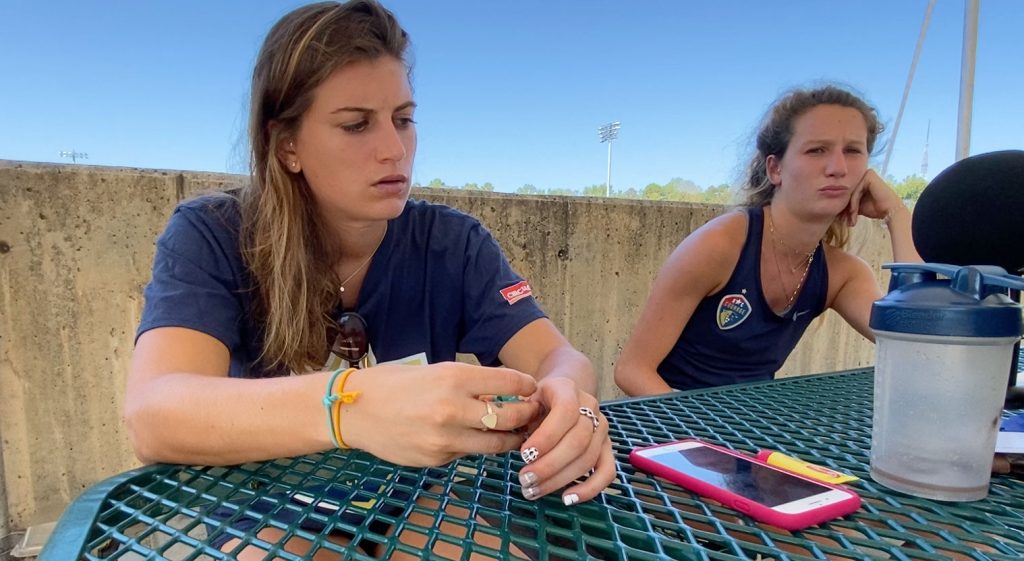 Cari: We already do a private vlog.

Cari: We already have a couple of episodes. But they’re not for sharing.

Cari: What would vlog? Dumb and Dumber?

Cari: Yeah, I know. We already talked about this. Dumb and Dumber.

Cari: Kicking it with Dumb and Dumber

Cari: Salt N Peppa is good too. That’s a good one, Salt and Pepper.

Ryan: Yeah, because I’ve got blonder hair than you.

Give me a question for the next player doing Starting XI Questions? We don’t have questions yet for either Julia Spetsmark or Hailey Harbison

Cari: Ok Hails, what’s your go-to dance move, and what song are you dancing to?

Ryan: I feel like I already know the answer to that for her.

Ryan: For Spetsy, what is your least favorite thing that Americans do?

Look for a follow-up article on Roccaro and Williams shortly here on Courage Country.