Courage Country sat down with North Carolina Courage‘s veteran goalkeeper, Katelyn Rowland. Like all our interviews so far, she concluded the interview by answering the Starting XI Questions. Read her answers below. 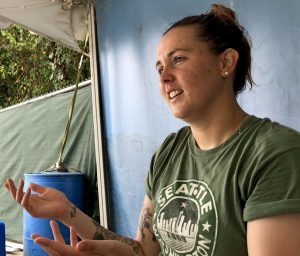 It’s funny because I’m not that into pre-game rituals. I don’t have a certain food I need to eat. About the only thing I need is coffee. That’s about it. You get here. You get treatment. You activate what you need to do, but I don’t have anything like I put on my left shoe before my right or anything like that. I do have a little routine once I get in the goal, but that’s about it. But it’s nothing I have to do before the game or anything like that. I’m weird. I jump up, and as soon as the whistle’s blown, I take my left foot over the 6-yard line. I’ve done it for the longest time and I don’t know why. If I did my right, I’d lose my stuff. 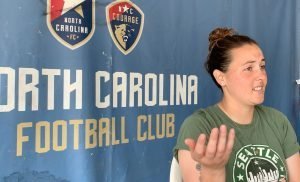 Growing up, I heard a lot of, “Be a student of the game. Watch a lot of soccer. Do this and that.” But it’s actually so important, especially today, the resources we have, you click on the TV and there are the best teams playing in front of you. It’s so important to watch that — just to understand the game.

For me as a goalkeeper, it’s actually important to me what our 10’s do, what our 6’s do, what our fullbacks do as they release high or they drop in. It’s actually very important to me as a goalkeeper to understand that. Yes, focus on what your position is doing, but you’ve got to understand the game, the tactics of it, and just educate yourself as best you can. 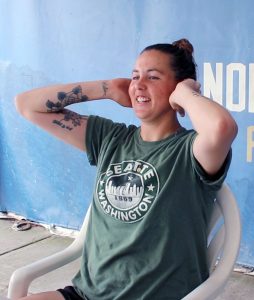 I get a lot of when I play, I play casually. I’ve gotten a lot of coaches when I grew up who would say, “It looks like you don’t care. It looks like don’t do this.” I was so confused. Finally, coming here to Paul [Riley], he was like, “No, I get it. You play with this calm demeanor.”

I think that’s a misconception of how I play and who I am as a player. It comes off as me not caring, but in actuality, I would get so mad growing up. I’d be like, “I care so much. I don’t know what you’re talking about.” Paul’s one of the first coaches to actually sit me down and say, “No, I understand.” When I first got here, he was like, “Are you OK? It just doesn’t look like you want to be here.” I was like, “I’ve gotten that my whole life.”

As we’ve developed and as I’ve been with him for a while, and our relationship has developed, and he’s understood me a little bit as a keeper, he’s been like, “You have a calm demeanor and I love that about you. It helps us because we like to build out of the back.”

I think Steph (Labbé) has a very similar demeanor — very calm, and that’s what Paul likes in his goalkeepers. We don’t get a ton of shots, and so being calm with our feet, and being able to handle pressure, and being calm and composed is something really important. 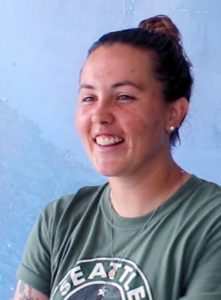 I think being whatever people need me to be in a sense of if that day is a good teammate, a good friend, a good anything. Our team is so good at that. We’re just genuinely good people. That’s what I really appreciate about this squad. It’s not just about football. We genuinely care about each other. I think that we do a really good job of tending to people. Maybe we have a practice player where we’ve been in six months, and it’s just straining on them. You just maybe just go pat them on the back and say, “Hey. We need you. You’re doing great.” I hope that I can be that for people. I like to play the goal that I need to on this team. I think that’s what a lot of people in that locker room would say too. They’re going to play that role the team needs that day. I think that’s what I try to do.

Maybe not home, but I drink a Diet Coke right after the match. I crave it after a game. It’s crazy. It’s actually when I get back in the locker room. It could be Diet Pepsi, but I prefer Diet Coke. 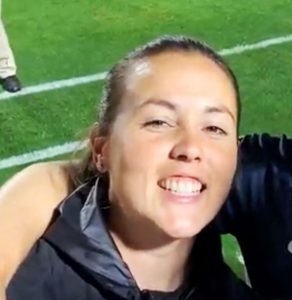 I actually think the best piece of advice I’ve ever gotten was you can’t ever get too high and you can’t ever get too low. I got that from one of my college coaches and it’s because, for me, my emotions with soccer are constantly like this — even in life honestly. Because a lot of what we do on the pitch, as much as we don’t want it to affect our days, it does. It’s our job. Life changes like this, and you can’t be stuck in a high or stuck in a low. I appreciated that and it’s just for me, control my emotions. She said that to me once, and it stuck with me forever. So I guess that would be one of the best pieces of advice I’ve gotten. 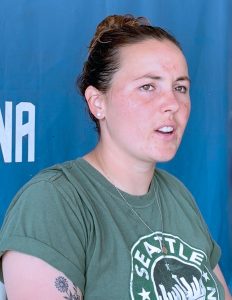 I can’t name one person honestly. I’ve been very fortunate to have a lot of really really quality coaches over the course of my career who has gotten me to where I am today. But I would say the past three years, Paul obviously, being one of the best head coaches I’ve played under.

But Nathan [Thackeray] has really developed the specifics of my position for me as a goalkeeper. He’s probably a coach that understands modern-day goalkeeping the best that I’ve seen. He really just understands. He studies the game. He watches and just really understands. Our relationship has gotten great to where he just knows me and understands me. He’s developed me in a way that I haven’t really been developed. I’m really thankful for him.

I think soccer’s a cool way to just create bonds and relationships you’re going to have for the rest of your life. I can’t say that I’ve been on a team where I haven’t had friends with someone still to this day. The soccer [world] is really small. It’s connected in weird ways and I’ve created bonds and friendships that I’ll have for the rest of my life. That’s something that doesn’t change no matter where you go. You’re going to meet people you’re going to stay close to.

Meredith Speck. She asked me what coffee I wanted from Jubala. It’s a good spot.

Besides Diet Coke and coffee? Probably Friends, the TV show. I could turn that on at 8 am, 1 am, 3 o’clock in the afternoon, and I love it. I’ve seen it — this is sad, I’ve seen it ten times through easily — seasons one through ten. 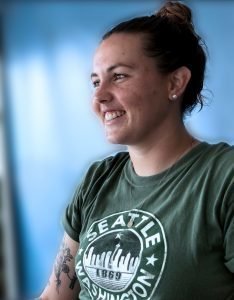 I think a couple of things. I think my friends honestly on this team. They’re really great people. I know they’re going to be my friends for life. Just hanging out with them, making dinner, watching shows, whatever.

Bonus #12 question from Merritt Mathias — If you could have dinner with anyone, who would it be?

I hate that question. I’m so bad at this. I’m like really bad with names too. I see a face, and I’ll remember them forever, but names. That’s tough.

Let’s start with favorite dinner, and then who would you share it with?

Give me a question for the next player doing Starting XI Questions? Next interview looks like it’s going to be Debinha

Yeah, what is her favorite American food since she’s been here? I want to know what it is. She’ll bring food home back to Brazil from here because they don’t have it there. You can ask her about what food she brings home or what’s her favorite food that she doesn’t have back home.

Look for a follow-up article on Katelyn Rowland shortly here on Courage Country.