Courage Country sat down with North Carolina Courage‘s veteran midfielder, McCall Zerboni, after a hot and humid morning practice session. Like all our interviews so far, she concluded the interview by answering the Starting XI Questions. Read her answers below.

So when I was younger, earlier in my career, I had a routine, superstitions, and all these things. But as things out of my control started to happen, and throw me off or keep me up till 4 o’clock in the morning the night before a game, whether it was family, or kids, or whatever, I’ve learned to let go, because if I’m expecting something to happen on game day that I need to have, but for some reason it can’t happen, then how do you mentally get out of that? So for me, I just want to make sure that my body is prepared — that’s always in my control — control my eating, make sure I’m hydrated, but most other things, I just roll with the punches, [have] acceptance, and let it go. 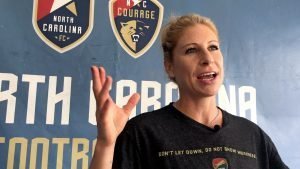 Time — the time you put in. Time comes in many different forms. It could be dedication. It could be sacrifice. What you’re spending your time soaking on — mentally, physically, that is the commitment you’re giving to the sport. If you would rather go to a school dance, or a winter formal, and miss a soccer tournament, then that’s the choice you chose. I would bet that a lot of these Courage players missed a lot of their school dances, missed a lot of birthday parties, and it doesn’t change because that now that we’re pros, we miss all the weddings, we miss all the nieces and nephew births. We miss all those things and so you become a pro way long before you’re professional. That’s the way you handle yourself. That’s the approach you take to life. That’s just making that sacrifice and that dedication. 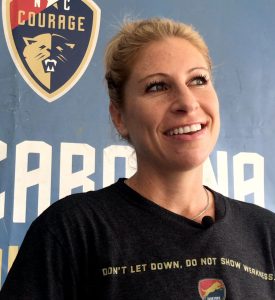 I feel that I have a… I don’t know if I’d say really bad rap but people think I’m an aggressive person. People think I’m mean or rude by the way that I play. I think what people have misunderstood about me for years is the way I play on the field to serve my teammates and to try to get my team a win is not the way I conduct my relationships in personal life and the way that I am. It’s just the way I play in my sport because that’s my choice to again serve my team and try to get the job done for them.

An elite mentality is being able to control your mental approach to anything in life. If you’re up and down and sideways in this and that, and out of control of your own mind, you’re not going to be able to do or achieve much. I think that an elite athlete has that elite mentality and that’s what sets them apart. Your body and ability is different than mine. It’s just the dream that I wanted to live out and the mental willingness and dedication that I had to make it happen.

I would hope that they would say that I’m a person who loves God and serves God, and represents Jesus as best as I can, and treats others with care and kindness, enhances people’s lives, and uses my energy to build people up and to make their life better and not ruin or destroy anything.

Pound as much water as I can. I’m usually dehydrated, especially playing here in North Carolina. A lot of times I feel nauseous just because you get that runner’s tummy — too dehydrated. So I try to pound as much water as I can. Then I usually rewatch the game. I don’t get much sleep after the games because I’m still calming down, winding down, and settling my mind. I’ll go back and watch some clips, and just try to take it in so the next morning I can dump it out, and move on and start preparing for the next game.

If you’re going through hell, keep going. It’s a quote and it’s true. Life doesn’t stop. It’s not going to stop for you, and it never slows down. So sometimes you feel like you’re striding and feeling great, and sometimes baby steps are just so hard to get by. Either way, you’ve got to keep going. Sometimes it’s easy. Sometimes it’s more difficult, but just keep moving and keep going. 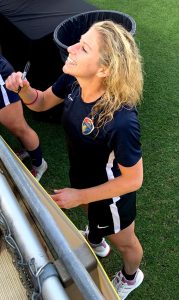 Leadership — I think my leadership, whether I’m in a designated role, or what you do in your actions will always show and shine for those around you. So for me, what I do affects the team. I take that with everywhere I go, whether it’s a small thing like hunching my shoulders down or throwing my hands up in the air. That stuff’s just not acceptable for me. It’s not the kind of body language and attitude you want to show. Those things can slowly start to creep into teams and get a negative spiral going. For me, it’s just making sure that I’m on point all the time and giving positivity and goodness to my team all the time.

Carli Lloyd, congratulating her and her birthday is coming up too. I know that this year has been difficult for her also. I’m just really proud of the way she handled herself in the tournament. 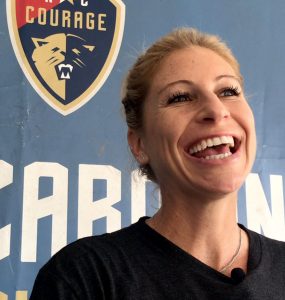 My cheat food is french fries. I love a good french fry. It doesn’t happen often, so it makes them better when I do. Then I always feel like if I’m watching a show, instead of reading or listening to a podcast, that it’s so dangerous. I’m poisoning my mind with a show. This is not helping me at all, but that’s kind of my guilty pleasure that I just need a release from life and working on myself for just a minute. I usually just watch a show as a distraction for a little bit.

Whenever I feel instances the world caring for each other, it really brings me a lot of satisfaction. When I see people go do good things or when I see communal things. When you watch the news, 85% is negative. So whenever they slap on a good story or you hear about something. The Internet can be so sour. Occasionally there’s that good thing. You’re like, “Yes! Let’s get this going. Let’s let everyone know because it inspires.”

Bonus #12 question from Lynn Williams: What’s the best music festival you’ve ever been to, and what’s the dream festival? 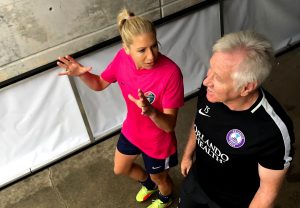 She’s so cute. The best one I’ve ever been to is called Paradiso. It’s in the Gorge of Washington. It’s like a four-hour drive from Portland, Oregon. It’s basically like the Grand Canyon in the background, and the stage in the front. It’s just breathtaking. They always set the best artists at sunset time. You sit on this grassy knoll and your mind is just blown by the music, the background, and the sunset. You’re chilling on the grass with all these people. Everyone’s swaying and together. It’s just a very communal feeling to me. It’s the stuff I’m a sucker for like that.

Bonus #13 question from Heather O’Reilly: We’re supposed to ask you about your pre-game speeches, your preparation, and said you’re really in the zone and a total pro when it comes to preparation. 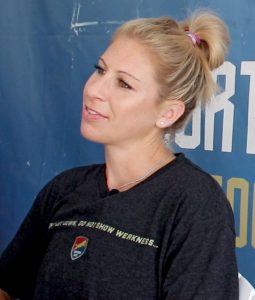 When I arrive at the locker room, that’s my time for no funny business. I also do that to be an example to my teammates. Ok, we joke around at trainings maybe throughout the week, but this is the time that the job needs to get done so for me, I’m very focused and pinpoint, But at the same time, Heather said my pre-game speeches, I’m kind of feeling out the group — maybe where they’re at emotionally and mentally on the day. What’s something I may need to say to get them all prepared and ready for when the whistle blows.

Give me a question for the next player doing Starting XI Questions? It’s going to be Jaelene Hinkle.

Ask her something about Tucker, her dog. Do you think you’re a good mom, or if you had to answer, do you think Tucker is a good dog or a bad dog?

Look for a follow-up article on McCall Zerboni shortly here on Courage Country.