Courage Country sat down yesterday morning, squeezing in our Starting XI Questions with North Carolina Courage‘s goal-saving, cross-sending defender, Merritt Mathias, fresh off of the training field, and on her way to review film.

Read her answers below. 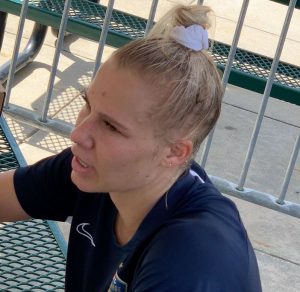 My nap. I always either nap or lay down every day — probably around 2, 3 if we have a 7 o’clock or later game. It’s such a long day of just waiting around. You wake up, and on away trips probably something else that will never change is we have a little girl gang breakfast gang that always goes to breakfast. We go every morning, especially on away trips — find a place that we want to go, get up, and the whole gang gets involved in a big breakfast — usually, get a thing of pancakes to split between the table, and we’re good to go.

The nap’s essential. For some reason, just waiting around makes you more tired so I need to take a nap and re-energize and then take a shower and head to the field. Usually, that’s something I won’t give up — the good little lie-down. 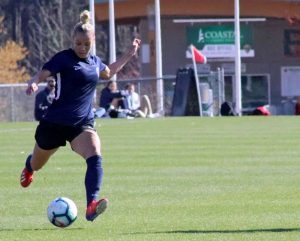 I would say practice. Get the ball on your feet as much as you can. It’s kind of a cliché but it changes everything. When I was young, my mom was a tennis player and she would be playing tennis, and I would go out onto the court and play within the little serving square — just like don’t touch the line. I always had a ball on my feet, hit the ball against a wall. I played in my kitchen, putting a time on the microwave, started it and tried not to hit any of the furniture.

I think the idea now is that you have to be in your practice gear and you have to have a soccer field, and it’s got to be beautiful. That’s not really the case. You can touch the ball and be addicted to it, no matter what. It can go with you everywhere. I think the more you have the ball on the feet, the more natural it becomes, the more you start being able to do moves that you’ve wanted to do with your eyes closed. It makes a huge difference. Even now, I know I can do a scissor because I practiced it a million times and I don’t even think about it. I think if they’re wanting to do something and lock it in, and lock it down, the only way you’re going to be able to do it is to practice it with repetition.

I think people probably see me on the field, and I’m pretty fierce and intense, and probably put off this persona that I’m a bitch. I walk around with an air about me and a confidence. That’s awesome, but I think off the field I’m a huge softie. If you’re one of my people, or close to my heart you are my pride and joy. I think there’s a big difference between who I am on the soccer field and who I am off the field.

4. What’s the first thing you do when you get home from a match? 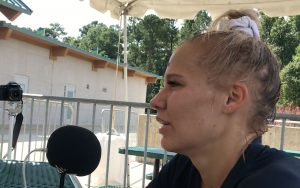 Unfortunately, I have a dog named Axle and he’s my baby, so the first thing I do is walk up the three flights of stairs of my apartment, get his collar on, go back outside, and let him go to the bathroom. It is brutal sometimes I will say. He loves when I come home, and it’s always great. No matter what’s happened, seeing him when I walk in the door is wonderful and he loves going on walks. It’s always been a way to settle down and take a deep breathe. It is what is is. So that’s the first thing I do. Go up. Get him and we go out on our little walk and come back inside and watch some sort of TV show.

5. What’s the best piece of advice you’ve ever received? 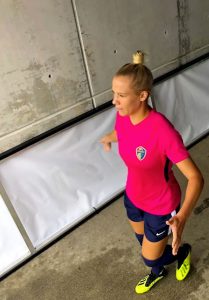 I think the best piece of advice I’ve ever received is probably from my dad and it was just basically don’t fear your greatness. I think sometimes we think, “Are we good enough? Am I doing everything I need to do to be successful?” On the field, it’s, “Tactically what am I doing? What do I need to do to get to the next level?”

I think sometimes you’ll find yourself getting too much in your head and you weaken that light a little bit. I think it’s important to remember you are great. You wouldn’t be here and all your hard work has gone to this point. If you don’t fear your greatness, you can accomplish pretty much anything.

6. What person outside your family has done the most for your soccer career?

This might sound like a setup, but probably Paul Riley. I’ve had incredible coaches growing up — probably my youth coach too. I’d have to give a lot of credit to him too — Jason Lockhart. He’s now assistant coach at USC. He invested a lot of time in me and was willing to put the work in with me in club. He’d go out to the field for hours working on things. So I’d have to dedicate a lot of my youth success and growth to him.

I think a lot of my professional success, being believed in, being seen and given the opportunity to be truly successful, and be what I want ot be, I would have to say, Paul.

7. Of all the teams you’ve played with, wherever you go, what’s the one thing that always stays the same? 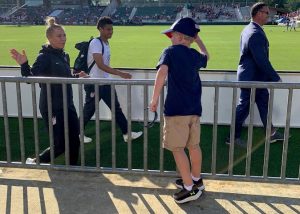 It’s really weird, but my jersey number. It’s a very odd thing, but wherever I’ve got, I’ve always had this gut feeling that this is the place I should go. There’s been other options, but it’s come down to my gut is telling me I should go to Kansas. Kansas was great, and I played number nine — number nine was open. Nine and 11 are my two favorite numbers so growing up, that’s what I wore. Nine was available, and when it was time for me to leave, or I felt like it was time for me to go, I was kind of stuck between places. Seattle was where I ended up being, and then my number became open.

Then when that kind of felt like this road has ended here, and this became an option, my number 11 came open here. It’s a weird thing, but I feel like it has always been the cherry on top that I made the right decision. Your number is available here, so it’s an odd thing, but I always find comfort in that and it’s been consistent in my career, even going from UNC to Texas A&M. The same thing happened. It’s kind of like the universe telling me I made the right decision. 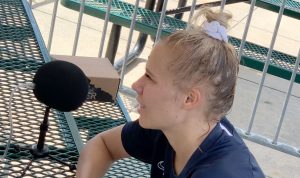 Ashlyn Harris. I was tapping through my Instagram story. She was at the VMA’s and all of a sudden, her and Cardi B are together. I was like, am I on Ashlyn’s story? But I was on Cardi B’s story. I literally like, “OK. You might have made it.”

Before that it was P, saying, “What happened? You went a step too far with your pink hair.” She still looks awesome.

I love brownies. I love a good brownie. I literally crave them. Also, recently, it’s been so hot here and there’s a Rita’s not far down from our house. I love the chocolate Italian ice with the custard mix. I’ve literally had to tell myself, “You cannot go today. You’ve been too much.” It’s also by where I take Axle on walks and I’m like, “Don’t look at it. Don’t look at it. Keep going.”

10. What brings you joy off the pitch?

My dog. Honestly, Ax is like my baby, and then shopping. I am a huge fashion freak. I love clothes. I love shoes. I love looking at trends. If I wasn’t playing soccer, I want to believe I’d be a stylist.

Bonus #11 question from Jessica McDonald: If you didn’t have to sleep, what would you do with your extra time?

Honestly, probably travel. I think I would travel to remote beaches and be on an island somewhere.

Bonus #12 question from NC Courage’s Manager of Communications, Morgan Brown: How did it feel to beat Reign FC this past weekend?

It’s always sweet to beat a team in the NWSL. It was a huge three points for us. I love Seattle. Don’t get me wrong. It’s like a home to me. I grew up there — my formative years.

I find Seattle very much home when I go there. It’s very peaceful. But it’s great to always be like, “We won. Again.”

Give me a question for another player doing Starting XI Questions? How about Denise O’Sullivan?

If you could have dinner with anyone, who would it be?

Look for a follow-up article on Meritt Mathias shortly here on Courage Country.